It’s a movie that delivers every time.

I don’t think we are. Let’s check in with Don Jr.

BONUS: If you have not yet seen the “Die Hard” episode of The Movies That Made Us on Netflix, I will host a watch party for that one hour before we watch the movie Die Hard.

What time shall we get this party started?

We normally watch at 10pm EST, but I am perhaps overeager for one of the best movies ever made.

Barefoot with wife beater on. R2G

OK I’m if it’s on at 10. Is there a tutorial for how this Netflix watch part stuff works?

If you are joining someone else’s watch party, you click their link. The movie will start playing. THIS IS NOT THE WATCH PARTY. You must now click the NP icon you installed in Chrome. That will now take you to the Watch Party.

However, Die Hard isn’t on Netflix.

You will have to pop in the disc or stream it yourself. Start it exactly at 10pm EST.

which one are we watching?

edit: No, that above is not russian “die hard”, it is russian fan vid to die hard.

Cinema, popcorn, and we’re sitting with Nastya
and which movie is this? Some horror movie?
No, it’s a blockbuster, it’s all mixed up
The strong nut is, yes, Jack, he’s just crazy

Who’s this bald guy?I’d fall in love with him
Well you’re dreaming… This is Bruce Willis
He’s the main hero and can’t stand ridicule
For the film he has the very strongest nuts

I don’t know what I should do with this mischief
A nut won me over with his bald head
Ah, what a fine nose and his glance is caustic
My man, my hero, my strong nut!

Basically, some terrorists took hold of a building
For John McClane, it’s a new mission
He saw, among hostages kept captive,
His sister? Nope, his ex-wife

But who wouldn’t want to save their ex?
And John threw the villain from the roof
But in the second part, his brother returned
He occupied an airport with a dozen guys

But John, even though he’s not the tallest
But a superhero from as far as the 90’s
Was swimming in blood like little pelmeni in sour cream
But the ones with strong nuts are the ones who win

I don’t know what I should do with this mischief
This nut won me over with his bald head
Ah, what a fine nose and his glance is corrosive
My man, my hero, my strong nut!

And in the third part, John became the town rescuer
Nastya, he fought with a psycho bomber
What, did people die? How’d you guess?
But if John was alive, there’d still be hope

He even ended up in a black neighborhood
He ran absolutely naked from n-word
And what happened to him? The point here is not to dilly-dally
If strong nuts are dear to you

But Bruce, I mean John, isn’t a plain guy
Even bald and bare-footed, he beats bad guys
He isn’t some cheapskate from the market
He’s the pride of the country, he’s an American cop

And I’m sure we have guys like that in our country
And you can’t count them on just both hands
That’s how they get kinged, simple pawns
But only the ones with strong nuts

I don’t know what I should do with this mischief
This nut won me over with his bald head
Ah, what a fine nose and his glance is corrosive
My man, my hero, my nut…

edit2: Lyrics have clearly to be taken not to seriously and play a lot with stereotypes.

Don’t sleep on With a Vengeance. It is a lot more fun than people give it credit for

There are movies that are essentially nothing but sensational stunt sequences… “Die Hard With a Vengeance” is the kind of movie where, toward the end, you start looking for the kitchen sink.

Willis and Jackson inhabit most of the scenes, usually together. Their dialogue is heavy on obligatory talk about racism, even though there is not the slightest sign that either one holds racist feelings; I dunno, I guess the use of the N-word makes action heroes feel macho.

I was not quite clear how they used the three- and five-gallon jugs to measure out exactly four gallons of water; a fourth grader can probably enlighten me

The idea has a certain allure to it: A cop is trapped inside a high-rise with a team of desperate terrorists. He is all that stands between them and their hostages. Give the terrorist leader brains and a personality, make one of the hostages the...

Yea I could never figure out getting 4 gallons out of a 3 and 5 gallon jug.

Actually, if you have not yet seen the “Die Hard” episode of The Movies That Made Us on Netflix, I will host a watch party for that one hour before we watch the movie Die Hard. I will add this info to the OP. 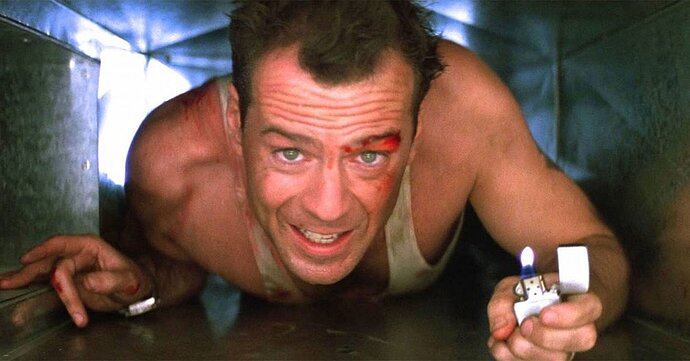 Warning: This article contains spoilers about Die Hard. Given its huge impact on pop culture, there aren’t many secrets left to reveal about the making of…