Tell Me More About Your Fantasy Football Team

…said absolutely no one ever. But feel free to post thoughts, questions, theories, code, data, bad beats, or whatever here. If anyone is interested in running or coding their own optimizer and CSV generator for DFS I can help with that.

not really, but it might be no money rake is 16% in tournaments.

I think MLB and NBA are still soft, but maybe it’s because I’m better at it. NFL there’s just so much data out there and a long time to process it that the edges are probably lower unless you’re actually good at it.

how do you approach correlation in nfl gpps? My current thought is that your lineups should be as correlated as possible for mid-size GPPs (lets say in the 1000s entries) but the bigger they are the less correlation (relatively speaking, I’d still stack a receiver with my QB) as the odds of someone hitting perfect one-offs are much higher with 200k entries.

meh, i kinda hate that approach but i guess yeah, you won’t be printing money if you suck.
it’s just a fun game.

In a way, yes. The cash games in NFL are probably unbeatable. People who can’t tie their own shoes get an entire week to find someone who’s done the work and is sharing correct answers. MLB and NBA cash are still beatable but not for much I think. I finished at ~15% ROI in MLB this year but that was from game selecting super hard. You can’t just enter everything now like in the past. I’ve won every year in MLB but it’s way harder. My swongz in NFL are huge and I’ve lost last 2 years.

In tournaments, the edges come from exploiting ownership far more than anything else. That’s more interesting and complicated, but the odds of winning any single gigantic tournament are meager. I think today you’d probably need at least a six-figure bankroll to (1) play correctly and (2) get enough volume down. I’m not sure how many guys are actually max entering every GPP, but it’s probably a few dozen? Just in MLB alone you can get down about $20k in tournaments on one site. More for NBA and way more for NFL.

Compared to poker, DFS is way easier, the rake is twice as high, and the multitabling script regs are multiplied by an order of magnitude. Like basically if you could take all of the worst elements of poker and amplify them you get DFS. And I still don’t think any of the sites are in the black b/c of the vc money

I think correlation matters a bit less than people think and ownership matters way more, so the thing I think about with large field correlation is how it affects ownership. For example, some gamestack like Kyler + Kirk + Metcalf was high owned last week so I don’t think it’s worth much since it kills 3 lineup spots. Antonio Gibson + WAS D was a good one imo. I also think that high floor / high ceiling is way overblown.

It’s amazing how insanely hard it is to make any sort of big money in a DFS contest. I play one contest per week (sometimes I’ll do a 50/50, too), usually just for $3. Just a fun sweat. Do some quick research and throw a team together. This was probably the best I’ve ever done - nailed pretty much everything except defense (Kamara didn’t give me great points/$, but it was still 22.80 points) and I STILL only came in 2,842nd out of 550,000. I mean, that’s awesome, but it still only won me $25 on my $3 buy-in (great ROI, obviously): 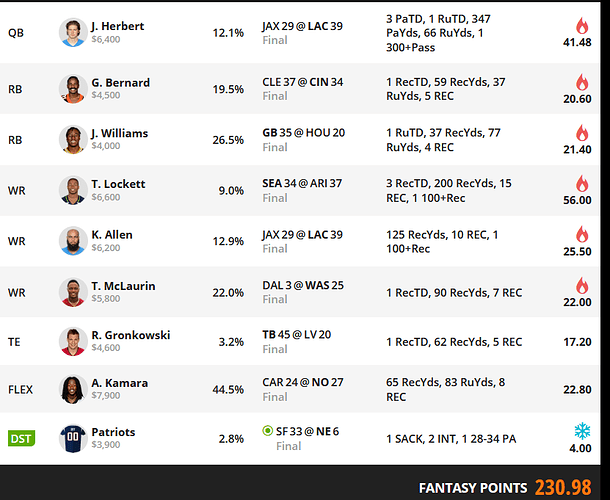 To expand on this a bit more, Lockett at 9% is so good. I had him on just about the same projection as Metcalf whose ownership I guessed would be in the 20% to 25% range. That’s what you should be looking for in tournaments.

The deep dive is a little more complicated. The reason Metcalf had a tough go of it is because he drew a shadow from Patrick Peterson. None of the sites I subscribe to were projecting that WR/CB matchup though. For instance, see: 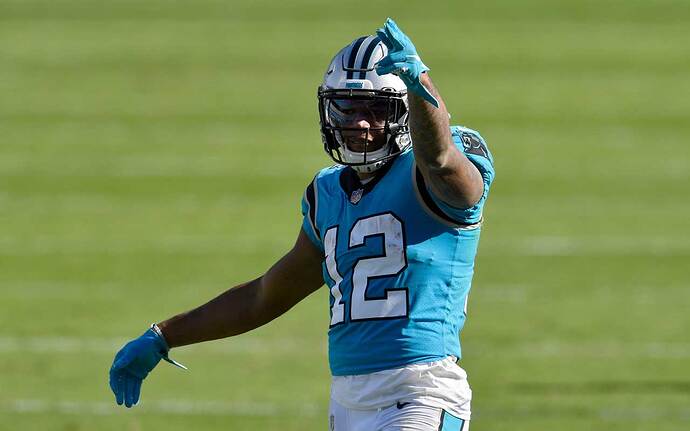 Below is a chart detailing each wide receiver versus cornerback matchup for Week 7, target rates, cornerback yards per target and reception, catch rate allowed, yards, and fantasy points per target allowed. We're a few weeks in and starting to get an... 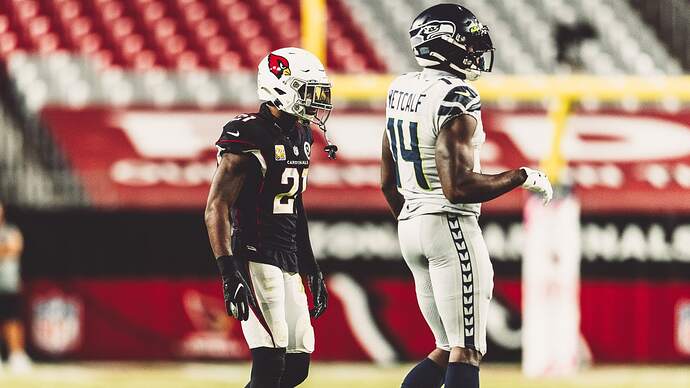 Numbers of note following the Week 7 victory over the Seahawks

Dating back to Week 16 of last year, Metcalf has played six games against non-Peterson cornerbacks and averaged 4.7 catches and 96.2 yards per contest. However, against the Cardinals, he has only caught two passes for 23 yards combined in two games, and Peterson has mostly shadowed him during that time.

According to NextGenStats, Peterson tracked Metcalf on 42 of his 49 routes Sunday and allowed just one catch for six yards on four targets. Peterson’s toe-tapping interception in the end zone also came on a play in which he was guarding Metcalf.

Metcalf did not have a catch and was only targeted once when Peterson guarded him last year in Seattle.

The projected WR/CB matchups don’t always tell us much because the receivers switch around a lot:

Outside of shadow situations, LWRs and RWRs generally match up with both outside cornerbacks over the course of a game, as almost every wide receiver moves around the offensive formation to varying degrees, and almost every defense plays zone coverage on at least half of its snaps.

Lockett in the slot means avoids PP regardless of if you project the shadow coverage correctly. David Moore was probably a great play on a showdown slate but not sure he gets there enough on a full slate.

So, yeah, I liked Lockett and had a ton.

We can check your theory in here. Just need the data.

Thank you for starting this thread that I can ignore instead of having to ignore all the FF posts in the football threads!

that’s when I quit other than lol gambling a minute entry once a week if that. **** DFS

Is there any decent free DFS option that could be used for a private group contest?

yeah. I expect them to be correlated a bit of course, but also to cap their ceiling, which i guess you can say is not as important.

If I do pay any attention to the D other than just spreading the ownership it’s to try and leverage a mediocre popular value play. So like last week I was planning on being really heavy on the Browns D vs Cin because of Gio’s ownership, but I switched off a bit when the Jamal Williams news broke and it was obvious Gio’s ownership % will go down.

I used to have the data in a big database but can’t seem to locate it now. Would rather come up with a source where I can just download it all quickly because I really don’t feel like writing a scraper right now.

Not sure about free.

So are you also not playing RB+WR stacks from same team? I get that it’s subtractive scoring outside of QB/pass catchers and DST/kick returners but it still seems like the 2 players from same team comes up a lot.