My golf season is about to resume in full force, so I figured I’d start this thread here with a hat tip to dreamcrusher28 for starting it on the Exiled site. Share your golf struggles, improvements and stories! 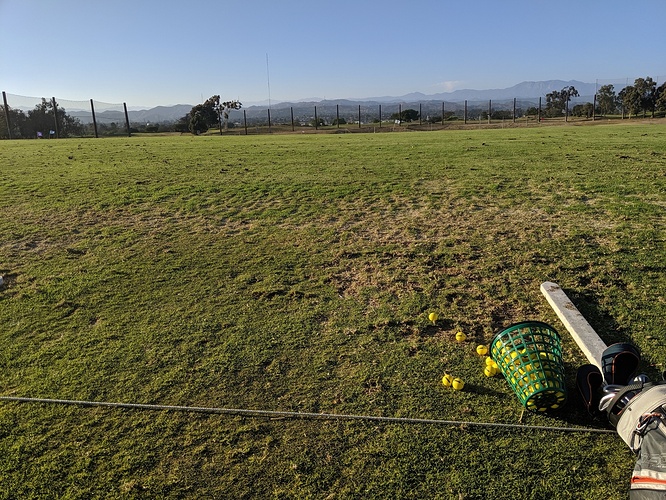 Great view from the putting green, this doesn’t do it justice… It’s up on a ridge overlooking one of the courses there, and the sun was setting over the horizon. 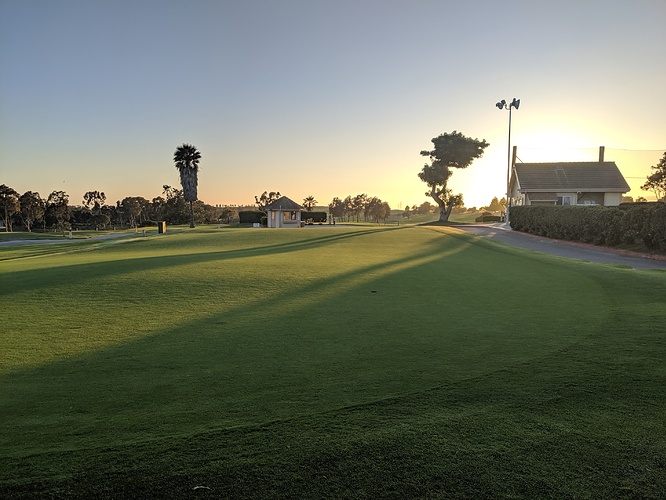 I should be getting some range time in tomorrow and maybe nine holes on an executive course, then hopefully a full round on Tuesday.

Something weird going on. There’s like 2 different unstuck sites. I can’t bookmark this one and I started a new golf thread in the one i can bookmark but there is no one there. Bring tapatalk back!

Ok, think I’ve figured it out.

I don’t think I posted these before but here’s some Travelers’ pics. Wife and I hit that up every year. We just need to somehow find tickets to the Masters. Have a US Open, Open Championship, and bunch of other tournies under our belt, will have PGA next year and Ryder Cup in 2024. Highly recommend attending a tournament if you have not and like golf. Even if you don’t like golf worst that’s gonna happen is have a good walk and some beers. 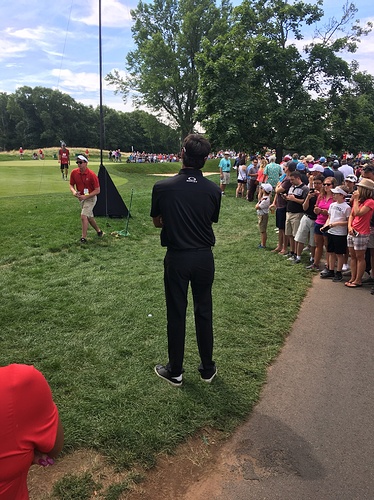 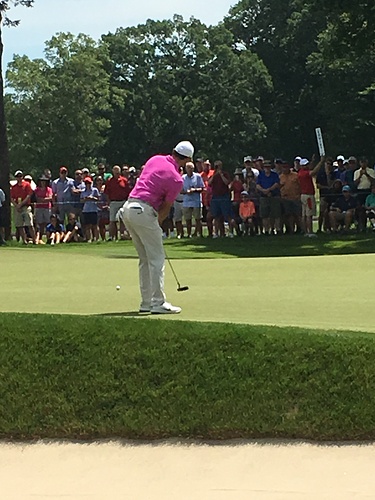 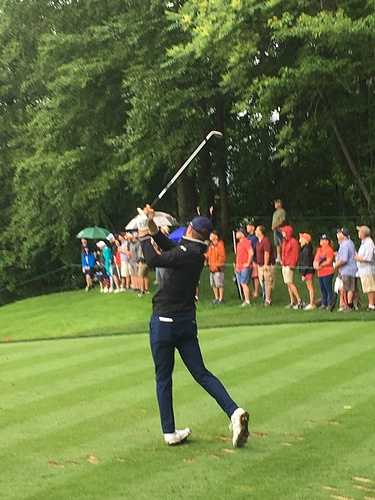 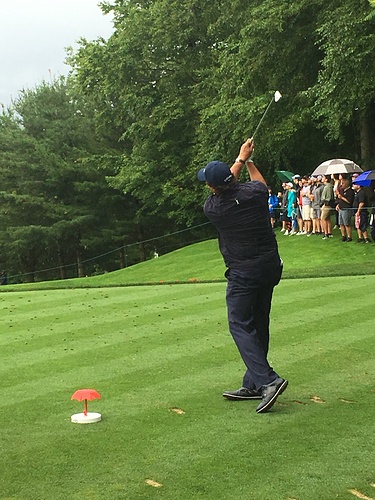 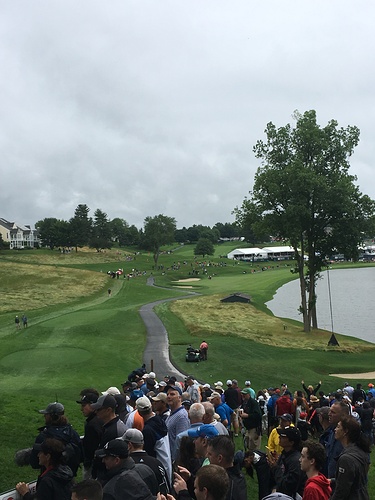 Yeah I’ve been to the masters and the quicken loans national twice. Golf is absolutely the best sport to see live, in my opinion. Lots of the guys will talk to you, give high fives, etc, and it’s pretty amazing to watch them in person.

Greats pics, golf is a really awesome sport to watch in person. I went to the Ryder Cup in 2016 and to the local PGA Tour stop this summer, being 5 feet away from these guys and watching them hit balls is unreal.

I know it’s Monday morning quarterbacking but at Travelers this year I held a rope up for Chez Reavie as he was entering the Par 3 4th because I was in his way on Friday. Looked me right in the eyes and gave a very genuine “thank you” to me. I told the wife after he strokes a gorgeous 5 wood from 230ish that we saw the winner right there.

I’ve definitely enjoyed the tournaments I’ve attended. I’ve done two US Opens (Practice Round at Congressional, several days at Merion) and one PGA (Baltusrol). I enter the lottery for The Masters every year, so far no luck. I’ve done the other ones with my Dad and I’m hoping we can get Masters passes while he’s still able to walk it without much trouble (he’s now 70).

Today’s round was at Rustic Canyon Golf Course in Ventura County, CA. Beautiful property, and a bargain ($39 for the round, cart and a small bucket of balls). 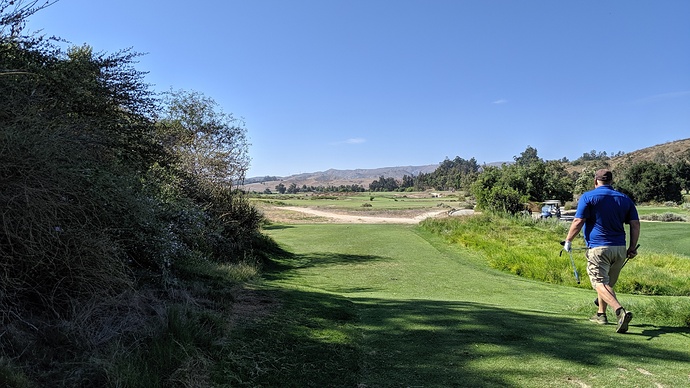 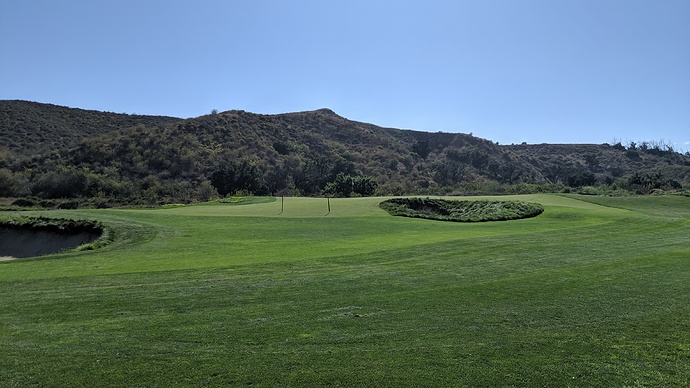 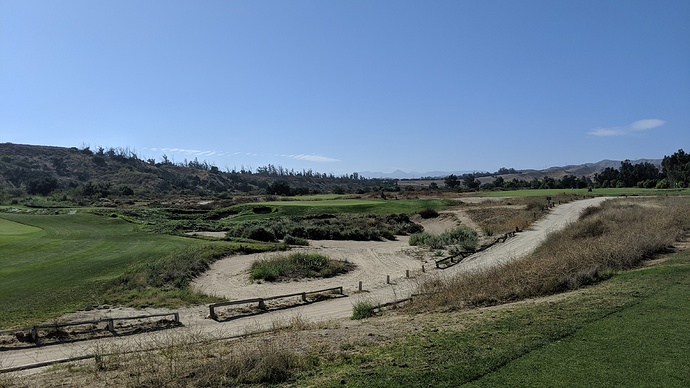 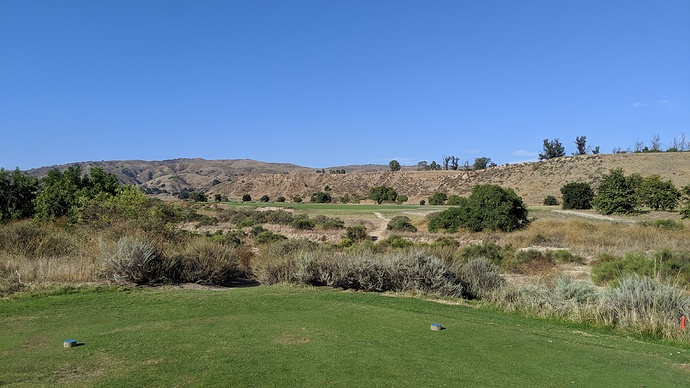 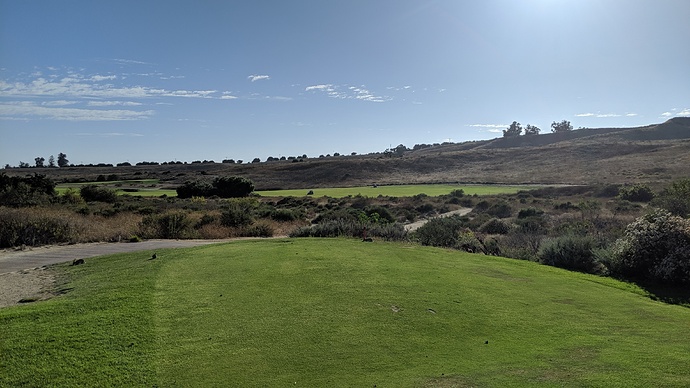 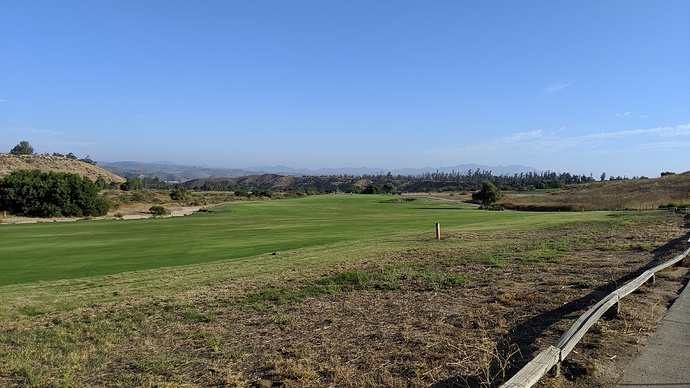 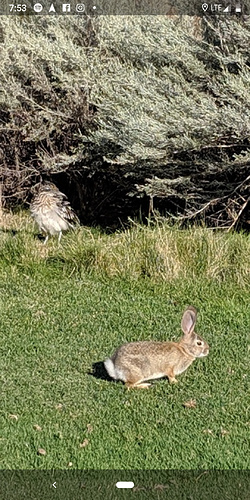 There was also tons of wildlife… Squirrels and rabbits all over the place, and that’s a road runner behind the rabbit! There were signs warning about rattlesnakes, but thankfully I didn’t see any.

As for the golf, I got called to the tee about 10 mins early so no time to putt… I was hoping to go as a single since it was my first round in over two months, but instead I got paired up with a local club pro and a local course superintendent. Both smoked drives on one from the blue tees as I pulled up to the tee box. They asked if I was cool with playing the blues and I said sure to keep things moving. I had planned on playing the whites, but distance is not my weak point anyway. That said, the blues rate at 72.0/133, so it was going to be a challenge for me.

I tried not to think about it too much before the first drive, didn’t want to add any more pressure! So of course I striped one down the middle and away we went. I opened bogey-par-par, bogeyed four and then my rusty short game got me with a triple bogey that involved three shots and two putts within about 50 yards of the green. I rushed the second and third pitches/chips, being as they were playing pretty quickly and I didn’t want to take extra time only to blade another one. Anyway, end result was not too bad… 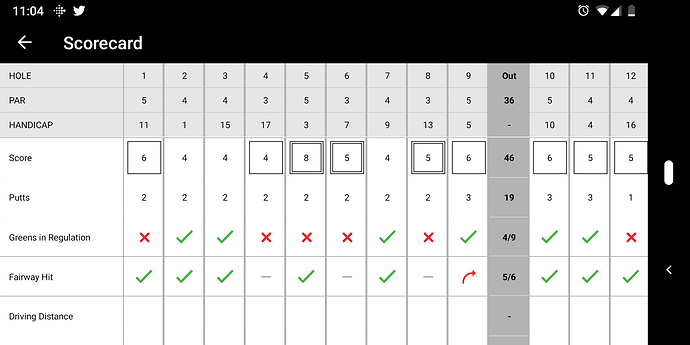 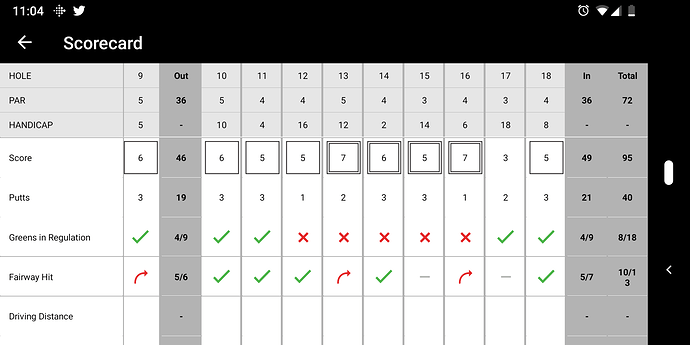 I hit 10/13 fairways, which is even more impressive given that I’m pretty sure that was 10 drivers, one 3-wood and two 3-irons. But two of the missed fairways were costly OOBs, and I took the two-shot drop up where it went out.

Given the blue tees, I had a lot of mid-long irons in and very few wedges - in fact I think I only had one full shot wedge all day, and a few of the little half wedges (very rusty). It is a little disappointing to have to lay up on all of the par fives when hitting the ball well off the tee, or to rarely have a short-iron in, but I hit 8/18 greens in regulation, so I don’t know - maybe I should be on the blues? Lol… I didn’t feel like I hit exceptionally good shots with my irons, so maybe it was just playing even more toward the safe part of the greens due to having longer shots in.

And of course my putting was just atrocious. Blame the two month layoff, no putting green time, and trying to match my playing partners’ pace.

I’ll take the 95 though, seventh straight round below 100 and I believe 10 of 11. It’s also my sixth best differential in my last 20 rounds, given the course rating, and my handicap is now an 18.2.

Most importantly, it was a fun afternoon. The twosome I joined was very friendly and laid back, so I enjoyed their company… And starting off hot to prove that I can play a little right out of the gates was nice to take the pressure off.

Funny aside: I’m rarely playing with guys who are low single digit handicaps, so I’m usually the long hitter in any foursome I’m in - and usually by quite a bit. I hit my driver 260-290 pretty consistently and poke one out there 300+ maybe once every 6-8 rounds. Despite putting on a driving clinic today by my standards, I didn’t get one past the club pro until maybe the 11th hole.

Now don’t get me wrong, I wasn’t turning it into a long drive contest or even thinking about it on the tee. But every time I’d hit one really well I’d get out to it and he’d be 20 yards past me and I’d chuckle a bit. So on 11 I hit it well, and he hit it pretty well too so I expected the same. Pulling up I could tell it was close and I was thinking “C’mon let me get it past him just once!”

Got him by a yard.

God damnit. I was playing a pretty challenging short course with severely sloped greens, brutal bunker placements and water on almost every hole.
Started the front nine white hot. Hit it to ten feet on the first short par 3, missed the birdie putt. Second hole I manage to par from 100 yards out (third shot, couple of shanks) after sticking the approach to 3 feet. Birdie the next hole after sticking it to like two feet on a ~130 yard par 3 surrounded by a lake. Was hype. Next hole, i shank my drive like two fairways over, have a 200 yard shot over trees in some brutal rough, cant even see the flag. Somehow hit a 5 iron pin high but into a nasty pot bunker. Get it to 6 feet and make the par.

At this point I’m like holy fuck. Then i proceeded to go +12 on the rest with like 2 quads. Gross.

Putting isnt horrific anymore tho so I have some hope.

Forgot about this round the day after the 99 at Crab Meadow. At least I’m consistent…ly horrid, lol.

There are people who would kill to ever break 100, so don’t feel too bad.

For something like 15 years, I could not play for a year and drop an 84 like it was nothing (was probably between an 8 and 10 at my best). After I passed my late 30s, I could put shots and holes together, but would often have a huge blow up across several holes that would cause me to stop keeping score (never was serious enough to keep a handicap). I started playing less and less, and haven’t played in about 3 years. I’d like to start again, but can never get motivated to do so.

I might struggle to break 100 these days, I have no idea.

In some good news I bought a new stand bag to replace the cheapie one I got last year as an experiment. Wasn’t sure I’d like carrying, plus I love my clicgear pushcart. But it’s nice to just strap on a bag and hit my course 5 minutes after I get home from work. I may even give this one a try at a regular course, it’s so light I think I could handle it.

Took a cart today, was hot and humid. Played a little better but had 5 or 6 penalties, ugh. Nice links course 5min from me but damn that fescue gets you when you miss. Wild driver was the cause most of the time. Few too many 3 putts too. Played better on the back 9, just missed 2 putts for birds. Guy I was paired with chipped in for eagle on the last hole, his first. That was cool to see.

My driver woes continue, spent a lotta time in the trees looking for ways out. Not surprisingly a course with ‘woods’ in the name has a fuckton of them, lol. 2nd shots weren’t too great either. Many penalties again, too. Hit some nice wedge and bunker shots and putted decent, so that probably kept it sub 100. I may never break 90 again, kinda depressing. Used the new carry bag, love it tho my back was a bit sore afterwards. Probably just need to get used to it.

you will break 90 again!