The topic of schools has come up a lot recently, as K-12 and universities try to figure out what they’re going to do for fall 2020 classes. But I think this topic is interesting beyond just COVID-19. Use this thread to talk about public vs. private/charter schools, school funding, SAFE SPACES, and the general liberal indoctrination that students experience in college.

The COVID-19 related topic that prompted me to start this thread is the idea that state budgets are obviously getting crushed by the effects of the virus, and that’s going to have a significant impact on schools. For state colleges/universities, the effects might not be as large as you might expect, because state funding of higher education has gone down significantly over time. But it’s going to really hit K-12 public schools hard, and it’s going to do so in a very inequitable way, at least here in Ohio. Here’s a slide I made for a class I taught a couple of years ago: 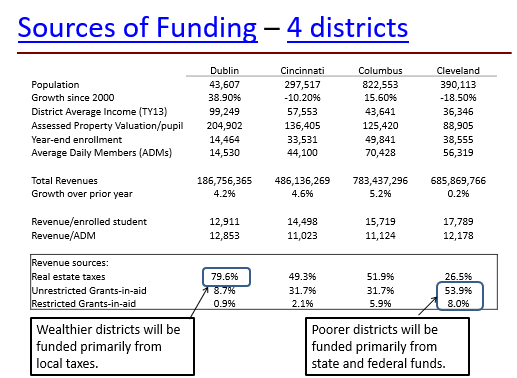 Basically, Ohio public schools are primarily funded by property taxes to the extent that property taxes are able to cover a minimum standard of education. For those districts where property taxes cannot fund that level of education (basically poorer districts without a large tax base), the state has to provide a larger portion of funding. So a relatively affluent district like Dublin (a suburb of Columbus and home of the Memorial golf tournament) receives the vast majority of its funding through property taxes, while a poorer district like Cleveland receives most of its funding from federal and state government. If state budges are cut back significantly, that’s really going to hammer the budgets of poorer urban and rural districts relative to the more affluent suburbs.

And that budgetary effect is on top of the fact that affluent districts already have better infrastructure, particularly in terms of allowing for at-home schooling. In the Dublin school district, every middle school and high school student has their own school-provided Chromebook that they’re using for online learning. And this is just speculation, but I feel pretty confident that having a parent at home (whether a work-from-home or stay-at-home parent) is more likely in these districts, making it easier to have effective online learning.

Anyway, I think the topic of education is pretty fascinating and deserves its own thread.

and the general liberal indoctrination that students experience in college.

I’m taking this as sarcasm. Sarcasm that pokes fun in the propagandic notion that students experience liberal indoctrination in college (besides the unavoidable fact that reality, including academia, have a built in bias in that general direction anyways). Correct?

I agree. Education’s COVID-evolution will be one of the more interesting (and high-stakes) adaptations to watch. I would add private colleges as another area likely to be hard-hit - though less so than K-12 and with lesser detriment to students. Most were already facing enrollment declines prior to COVID due to students increasingly choosing cheaper degrees, and it won’t be any easier to justify 40k+ tuition costs as classes remain online.

And man, does online teaching suck. I think my courses turned out well last semester, but with about 3x the workload for me and 1/2 the interpersonal value for students.

I’m taking this as sarcasm. Sarcasm that pokes fun in the propagandic notion that students experience liberal indoctrination in college (besides the unavoidable fact that reality, including academia, have a built in bias in that general direction anyways). Correct?

Yes, that was me poking at the old 2p2 education-related threads. I don’t believe that college students undergo a liberal indoctrination, outside of the general effects of becoming more educated.

The Democratic base has shifted solidly to the left over the last 40 years. That may or may not be attributable to colleges developing much more worldly curriculum, but it’s hard to say.

Also, “indoctrination” isn’t quite the correct term for what may be happening. It’s not that professors say “this is right”, “this is wrong” so much as they tell on themselves by what they choose to teach. Or are told by their Department handlers to teach.

Canon literature is the most obvious example. Dead white English men (like Shakespeare and Dickens) being bounced for more worldly fare is all too common. I would argue this has led to at least a subconscious change in how people already disposed to the left of the political aisle think.

IMO the growing association between college education and Democratic affiliation is at least in part due to the increasingly anti-science policies of the GOP. A reasonable amount of research literacy and exposure makes it a lot harder to get on board with climate denial, racism, education/childcare funding cuts, etc.

I thought the growing association of college with the Democratic Party has more to do with college being much more widely available to minorities than it used to be.

White college grads voted for Trump over Hillary I believe (or it was close).

Seems pretty clear it’s multifactorial. I’m not attributing all of the effect to what I described above. That said: https://fivethirtyeight.com/features/education-not-income-predicted-who-would-vote-for-trump/

So today Harvard Medical School announced that fall classes will be online. 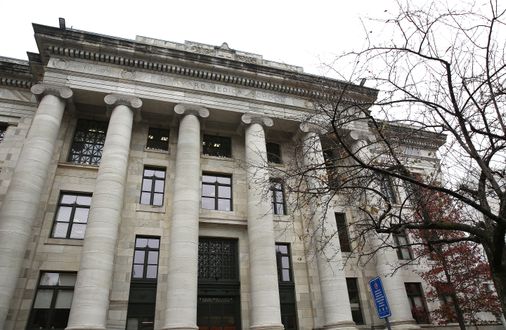 The differing decisions announced Wednesday demonstrate the uncertainty facing academic institutions amid the growing uncertainty over the coronavirus pandemic.

In the same article, UMass says “it expects to hold classes on campus for the fall but remote learning will likely be necessary to limit class sizes”.

Closer to home, Ohio University plans to have classes in person. 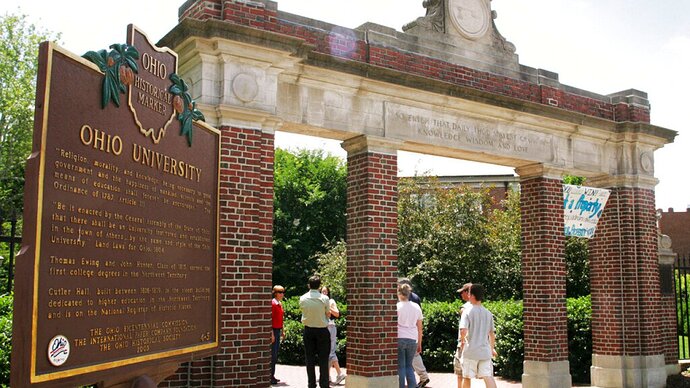 Ohio University plans to return to campus this fall

ATHENS, Ohio– Ohio University says they will open their campuses this fall semester. “With the health and safety of our University community at the top of our minds, we are planning for our n…

Furloughs and pay cuts are happening all over the place, too.

No announced pay cuts for my school (yet), and I’m told we’re going to announce our final decision some time in mid to late June. No idea what the decision is going to be, or even what I hope it’s going to be.

No real updates on whether we’ll be back in the fall, but I feel like we’re going to be doing in person, with students having the option to take classes remotely. People keep talking about preparing for a “hybrid” class, but no one can seem to articulate exactly what that means.

In other news, I know of two people who were denied tenure in the past few months. These are two people who I thought had a substantially higher than 50% chance of getting it, and I can’t help but wonder if the combination of virus uncertainty and long-term negative trends in higher education are making schools more reluctant to make the long-term financial commitment that comes with tenure. Of course, these are just two individual cases out of a zillion, so who knows?

I’ll be teaching for the University of Sheffield online this summer due to covid19.

However, I expect schools in the Czech Republic to open on time for the next school year barring a second wave. That said, I wouldn’t be surprised if a second wave came during the school year and resulted in more cancelled classes.

Students are mostly Chinese. Plus, I’ll be teaching over the internet meaning I won’t even be leaving Prague.

Basically, the Minister of Education is proposed that schools be opened in a limited capacity starting June 8th.

Telling schools to open up without any advance knowledge of these supposed limitations with less than 2 weeks notice is absurd. It makes absolutely no sense to open schools for the final three weeks of the school year. Sure, it might make administering final exams easier but other than that, it’s complete idiocy.

There was already an outbreak at a kindergarten in Prague that shut down the school for two weeks. Now you want every school to open? Stupidity.

Our school is planning on adapted schedule that starts early (August 17), skips fall break, and ends the semester at Thanksgiving. Theoretically we’ll be starting fall classes in-person but I still can’t imagine that will be possible after a likely summer bump.

My kid’s probably going to start kindergarten in the Fall with the whole school wearing masks. Makes me a little misty just thinking about it. I really don’t want to (for her sake) homeschool kinder but it might happen.

The university the wife works for is currently undecided on the fall. I can’t imagine they’ll have students back on campus. Idk how comfortable we’d both feel about her having to go meet with students and teach her classes.

She’s currently involved in creating a fully remote orientation program for incoming freshmen that starts in a couple weeks. It seems to be working out okay but I’m sure once it actually happens they’ll be a ton of fires to put out which should be fun for us as I WAH and entertain the little one. Luckily my office has been super accommodating.