Will this country be livable in 4 years?

I’m scared. I’m pessimistic. I don’t think Biden is that bad and I’m afraid if BigDon sticks around nothing can save our nation from wide spread violence and potentially un thought of chaos. If Trump goes away quietly we should at least start to heal if not be fine.

But what scenarios do y’all envision if he sticks around, pounding Twitter , daily interview on the shit 3, Fox, Old Angry Network and Newsmax? He will seek revenge against Republicans who have tried to be sane and responsible. He will groom candidates for those seats that are extremists and quite dangerous. He will continue to bleed any integrity that’s left in his party.

I see 2 types of Republicans. The rich who don’t really take him seriously and cringe at the bottom of the party who like , form rock throwing parties in from of Cuomos house but they are to greedy to give up the money he makes them .

Then other half are the deplorables which are absolutely terrifying. They are brainwashed and possibly the biggest cult the world has ever seen. I prolly won’t live to 98 so I won’t get to read history books 50 years from now. Their masses have grown so large that candidates have to cater to them and be held hostage by trump to keep their votes. They are racist, homophobic, violent and grow more brazen by the day. Think of where the right was during Reagan and Bush. It’s got this crazy this quick. It’s getting nuttier more exponentially quicker than covid. When does the insanity hit a wall.

If Trump pounds the stolen election shit and other garbage.has rallies etc and continues to wind them up for 4 years we are fukkin doomed.

This part my seem a little conspiratorial but what if he refuses to lose in 2024 and gets the military involved. Most hear say that’s not possible but who actually joins the military these days? I took a quick sample of this site and my liberal sleeper cell and it’s not many if any. Maybe I’m wrong and can be corrected but are people on the left graduating HS and college and becoming cops or entering the military? I have no idea what the #s are and they are prolly not available but I’d guess 65-35 right ? I mean people that want gun control usually don’t take up shit careers just to shoot people.
Hopefully I’m wrong of he grifts away.

But what scenarios do y’all envision

I think the low end of the range is periodic domestic terrorism, like a Nashville bomb every week. People become numb to it like they have to school shootings.

The upper end of the range is American ISIS taking over chunks of the country. American conservatives are just as blindly devoted to their religion/cult as Islamic jihadists.

Are the any sane and responsible republicans?

I’ve yet to see one. They don’t stand for the common good of all.

I don’t really think that there are. If there are any, I think we should pretend they don’t exist.

This part my seem a little conspiratorial but what if he refuses to lose in 2024 and gets the military involved.

Help me understand this sentence. You’re asking what if he runs in 2024 as a private citizen, loses, but then the military backs him and there’s a legit military coup?

The rich who don’t really take him seriously and cringe at the bottom of the party who like , form rock throwing parties in from of Cuomos house but they are to greedy to give up the money he makes them .

Then other half are the deplorables which are absolutely terrifying. 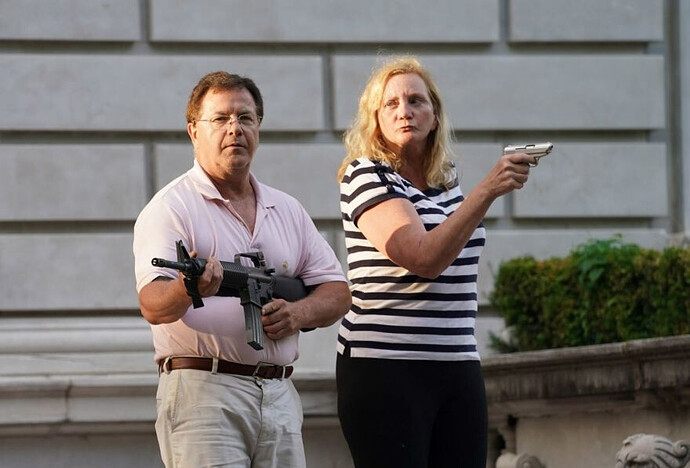 Romney has been ok

Yes, I know, it’s out there a little but 70 million people will have thought he won. We already have sporadic outburst of Republicans calling for re-elections and Marshsll Law. What percent of the military and police do u guesstimate are Republicans.

85% of the police and about 50% of the military, though the military is probably very largely unaffiliated.

No, that’s fine. I mean I disagree with this being in the realm of possibilities, but you said it was a conspiracy theory from the get-go, so have at it. I really was only asking to make sure I understood what you were really saying.

My personal take is that the country is barely livable now. Maybe that is because I live i OKC, maybe not. My wife and I travel extensively we have been all over Europe and to a few places in Asia/S. America. We always comment how much more wholesome the vibe seems in these places. How it’s nice to get out of the American Corporate hellscape. There is some of that sure, but just seeing literally the same hotels and restaurants at every highway exit here is soul crushing.

So this country, supposedly the greatest country on earth, is largely a hollowed out hellscape to start with. Sure there are nice places but 80-90% of the people live in misery and their escape is Cracker Barrel or an annual trip to Branson. It’s beyond depressing.

My point of mentioning that is that I think this right wing mania is largely a result. These people need something or somebody to blame. They were promised living in the greatest nation on earth and instead they largely get microwaved meals and living paycheck to paycheck. Trump was the first to really exploit this group but he will not be the last. The Republicans have feared the creeping growth of minorities in this country for some time and now they know their one solution is simple, white supremacy. That’s still enough to win a lot of elections and wield enough power to block any and all change.

So where does that leave us in 4 years? Well the income inequality issues will only be worse. The Trump segment of the population is seeking more and more radical news sources. Those people are never coming back. Biden’s presidency will be a disaster. We will lose Georgia, Mitch will obstruct everything, Covid will be here to stay because those big 3 networks you mention will continue to pump lies and misinformation. Some people will get violent. I think we see a major economic reckoning sometime in the next few years. 2022 and 2024 will be disasters and then for all intents and purposes the country is over. We already see a huge portion of the Republican party and base wanting and trying to overturn a not that close election result. In the near future Republicans will seek to outright rig the elections to the extent that they can if they aren’t doing that already.

The whole thing is beyond depressing.

Is this country livable now?

just seeing literally the same hotels and restaurants at every highway exit here is soul crushing.

Yeah it can seem like a superficial concern and for a while I felt kinda silly about it, but the truth is I’m always going to do everything in my power to live in an area without this. For a while that was Portland before they made a TV show about it and studio apartments started going for $2000. For now, it’s Richmond. Central city both of those, though there’s some chill places a bit further out for both.

The rise of warp speed brainwashing also adds fuel to the fire . Yesterday at an out door beer garden I watched 2 girls almost fight over abortion. One insisted that most abortions have babies get plucked out of the uterus at 7.-8.5 months . Sane Sally disagreed which some choice words not allowed here l

They got separated but abortion Ally actually had some rando backing that supported her claims. 30 years ago these type of quacks would have been checked into the funny farm by their families. If the right can convince people this is true, what is their next project?

The Dominion voting ATT voting machine malarkey is going traction too. TEAM EDUCATE YOURSELF is all over it.

On a lighter note I did shut up one of the can’t believe the media clowns. He lives in New York I pleasantly asked him if he enjoyed the snow storm. I told him I lived in the south and him how I knew it snowed.

There is some of that sure, but just seeing literally the same hotels and restaurants at every highway exit here is soul crushing.

My point of mentioning that is that I think this right wing mania is largely a result.

I’m not sure which is the chicken and which is the egg, but it’s interesting that one of the chief character traits (or thought to be anyway) differentiating conservatives from liberals is openness to new experience and we are in the country (more than any other country in the world?) where it’s like the same stores and restaurants everywhere and a lot of people want it that way.

But it’s still a growing culture… if not so much in #s but in brazenness. Also families are divided. Hundreds of us avoid or have cut ties with close kin. Growing poverty and the widening of the income gap continue to breed hate , anger and violence. Our country is a fraud Lst broken beyond repair.
I’m with @WhiichitaDm. I want out

[Article] The Paranoid Style in American Politics, By Richard Hofstadter |...

It had been around a long time before the Radical Right discovered it—and its targets have ranged from “the international bankers” to Masons, Jesuits, and munitions makers. American politics has often been an arena for angry minds. In recent years we...

The paranoid spokesman sees the fate of conspiracy in apocalyptic terms—he traffics in the birth and death of whole worlds, whole political orders, whole systems of human values. He is always manning the barricades of civilization. He constantly lives at a turning point. Like religious millennialists he expresses the anxiety of those who are living through the last days and he is sometimes disposed to set a date fort the apocalypse.

Day to day life for most people 4 years from now will be largely the same as it was for them 4 years ago. For those in the bottom 20% it will be a bit worse.

I do no in any way mean that to be optimistic. We are almost certainly in decline. But it will be a long, slow one where few experience the worst of it directly.

So u see no threat on the acceleration of the deplorable movement? What do u think happens if Trump keeps beating his drum and loses 2024 in similar fashion ? I hope your right .