The beer, wine, and spirits thread

This topic has come up in a few different threads, so it seems like a good idea to have a dedicated thread for it. This is the thread to talk about booze.

I’m primarily a beer drinker, arguably a pretentious beer drinker. At some point in my mid-20s, I discovered that there are beers I actually enjoy the taste of (as opposed to just tools for getting buzzed), and from that point forward I’ve just spiraled down a rabbit hole of high-quality beers. Now, I’d say my favorite styles of beers are probably:

I have a history of being overly-aggressive in my purchases - for a long time, many of these beers were available on a limited basis, so I’d scoop them up whenever I saw them, either online or in person. And the number of bottles in my basement office/beer room just kept growing and growing because I wasn’t drinking them nearly as fast as I was buying them. But in the past couple of years, breweries have ramped up their production and distribution of these beers, so that they’re very widely available to me, and I’ve finally managed (kind of) to cut back my purchasing and to instead drink down my stash.

A related issue that pops up is that, in cases where I’ve been fortunate enough to get some of these bottles, I face the problem that I have trouble bringing myself to actually drink it. It’s one thing to look forward to a beer that you paid $25-$40 for. It’s another thing to look at a bottle of beer that you know you could sell for $300 and ask yourself, “Am I really going to get $300 of enjoyment out of that beer?”. For me, the answer is generally no, which leads to the bottles just sitting there because I’m always unwilling to sell them. But I’m also not willing to sell them for cash, for reasons that I can’t really articulate, other than I don’t want to run the risk of being arrested for selling liquor without a license. (I did trade one of my bottles for a brand new Garmin Forerunner 245 watch, which I was pretty excited about. I’m sure I still wouldn’t have opened that bottle by now if I had kept it.)

In any event, let’s talk about beer, wine, and spirits.

After getting some good news at work today, I thought I’d open a nice gueuze from Cantillon: 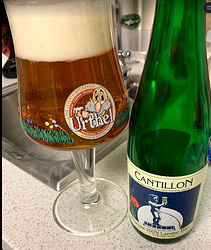 Cantillon is basically only available to me by ordering from Belgian shops online. Fortunately, Drie Fonteinen and Tilquin make comparably good Gueuze, and both of them are getting easier to buy in local stores. So life is good, at least that aspect of it.

Living in San Diego is wonderful. Great weather, laidback lifestyle…and over 150 craft breweries in the county.

Forget Portland, SD county is the craft beer capital of the US. We also search our local breweries wherever we travel.

I like sours, Belgian and American farmhouse style ales, and porters and stouts. I’m not a huge IPA fan, especially the overly hopped, overly-grapefruit flavored west coast IPAs that the San Diego places love to make.

You know how people have extra refrigerators in their garage? Well, We do too. This is ours: 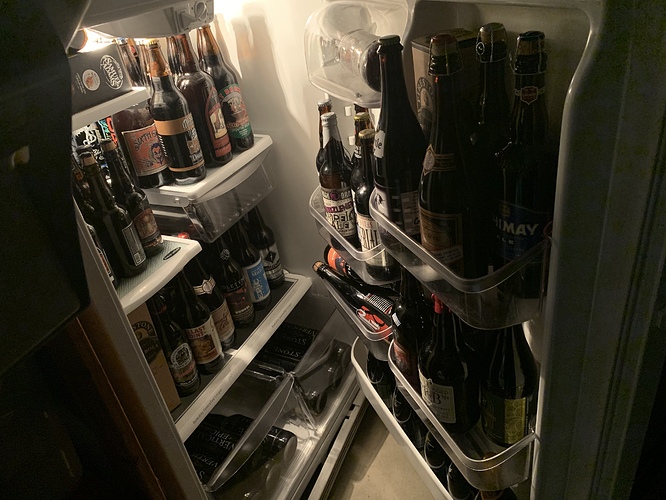 Not all of these are San Diego beers, a lot are things we’ve found in our travels. We have countless pictures of taster flights all over the US and Canada

Lul. That’s a good one

Did you fix mine? Or found another gif?

I can’t see what yours is, it’s so small lol.

Just paste the whole image location into a post.

It’s the same gif. Great minds and all.

I did the upload thing. Idk why it’s so small

I’m pretty big into beer and try to drink 4-5 new beers a week (probably closer to 7 now that I’m fairly sure the world is ending).

Currently I’m really into NEIPA and sours but it changes.

Anyone else go buy random French wine at Trader Joe’s because of how much cheaper it is than a regular liqour store? Have been doing this for a while and I’m rarely disappointed.

We actually have a pretty elite craft scene locally considering that I live in the middle of nowhere. We even have a craft mead place. Not my thing but pretty cool.

This place, in addition to having one of the best rotating selections around, does some really cool small batch stuff. It’s a great time to be a beer drinker.

Cali Creamin Nitro from Mother Earth Brew Co (San Diego based) is one of my favorite draft beers. I started to really enjoy beer after my last visit to San Diego, and I credit that beer with making me want to expand my pallete and try different styles.

Uploaded images > 4 Mb get resized to be under that limit. This works well with PNG’s and JPG’s, but really awful with animated GIF’s. So if you have a big GIF, link it instead of uploading it.

Most of my life I’ve been into beer, and I homebrewed for a number of years and got very good at it. I sort of cycled through the various styles, getting bored with certain things for a while, (hello American IPA), and then cycling back to them. I really love German and Belgian styles the most. My wife doesn’t like beer.

The last two years I’ve been into wine and my wife really likes it too. We have offsite storage that will hold about 400 bottles, and we will be building temp/humidity controlled storage in our house for about 1200 bottles once we get through this coronavirus situation.

Our favorite whites are Bordeaux blends, Chardonnay (White Burgundy but some from California), and Condrieu (Voignier grape) and other whites from Northern Rhone.

Our favorite reds are Pinot Noir (mostly Burgundy but some from Oregon and California), Beaujolias (Gamey grape), and Syrah from Northern Rhone. We don’t drink much Cab Sav but when we do they are usually from WA, as the pricing is more reasonable than Napa.

Our true love is Champagne, and we’ve already spent nearly our entire wine budget for this year putting away 2008 Cristal and Dom Perignon with some smaller amounts of other vintages. 2008 is an amazing vintage that will likely age well for 20+ years and possibly up to 40 years. We’re also learning about grower Champagnes and different Champagne styles.

We’re trying to build the cellar slowly since we really just started and we’re learning a lot. We don’t want to end up with a cellar full of stuff that we no longer like to drink.

My wife’s parents have a winery and vineyards in Israel. Sadly I really can’t appreciate good wine. I tried to get them to try some of the craft beers here but they only liked the PBR cans my wife had in the fridge.

Used to drink a lot more beer than I do now. It’s deliciousness:calories ratio is quite poor compared to wine and spirits.