Magic: The Gathering or MTG or MTGA aka MTG Arena

They pushed a patch through and i’m back in now.

I’ve played thousands of hours of MTG. Finally had a clean break maybe a year ago. Ban OP!

just started back and found a deck i can actually put together that I’m winning with, ranked up from bronze to nearly gold today.

its pretty nasty and low skill cap which is great for me, the Thermo-Alchemist interaction is nasty. 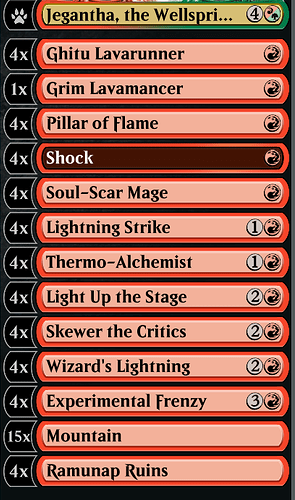 oh meant to say this is historic, not Standard

Hard stuck in platinum this month, can’t win in historic or standard. 4c omnath/lotus cobra/genesis ultimatum has felt like the strongest standard shell but it’s inconsistent

I’m jamming the new draft format, keep ending up in blue for the first few drafts

made it to gold with the list above minus the experimental frenzys, i realized they weren’t really working, tried 4 Viashino Pyromancer, then 4 Rampaging Ferocidon because there seems to be alot of lifegain running around.

That slot is supposed to be 4x Chandra’s Incinerator which would be way better than both but i don’t have the rares, should have them soon enough.

also i get that the Jagantha is there as basically a free big creature when you run out of gas but out of like 30-40 games i think i’ve cast it once to actually put the creature in play.

Also I’ve been throwing like one every 3 games cuz im bad and still climbing. At least i’ll get a few free packs in 10 days when the season ends.

Think you can definitely cut pillar of flame and probably thermo, maybe cut the skewers to like 2, put in steamkin and use the rest of the slots on either ferocidon or chainwhirler. If you are having a lot of matches where you run out of gas then cut a frenzy and put in 2 ch4ndr4’s (probably 3/1 split is better than 4 frenzy in most builds tbh). I can’t hate 21 lands but I’d probably just gambol and run 20. I don’t think you lose much running the 2-3 red castle land as you have plenty of swingers and its sure to win a game here and there for you… Mono reds been my goto for laddering for some time. Sometimes the meta is against it and its very hard to win but a lot of the time its just the best deck and 75% bo1 plat and below. 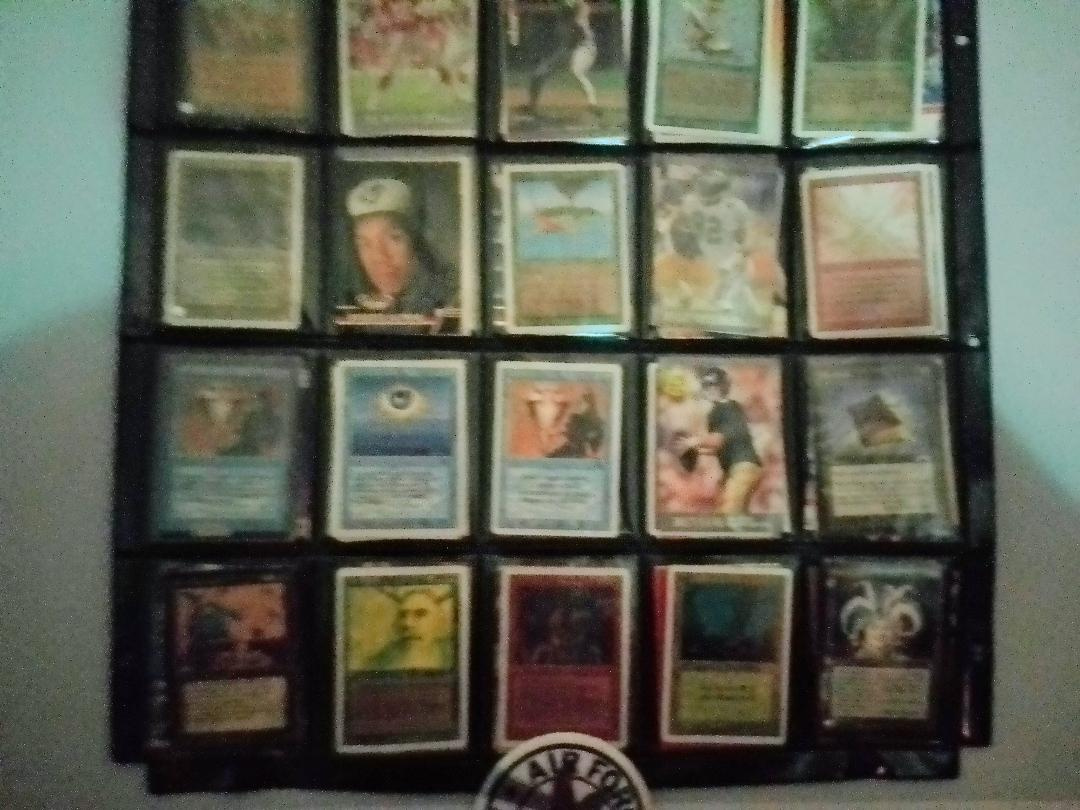 yeah terrible quality but there is my Rishidan Port in top left, Bayou under that, and alpha unsummon under that (alpha is alpha)

My first booster was a Roc of Kher Ridges and it just confused me. Didn’t feel like a rare so I think I obsessed over my craw wurm or something.

The goblin historic deck is dumb, its just ramp to Maxxus or whatever his name is, play it and win, card is a joke. Not enough that he puts all the cards into play and digs deeper for them, basically an unholy version of Ringleader, but on top of that, he gets huge when he attacks.

Yeah it’s pretty degenerate. In good news it got steamrolled during the mythic invitational. Jund sac has a fantastic matchup against it.

4c Omnath is the most degenerate standard deck I can remember. I cast three genesis ultimatum on t5, it’s really dumb

I’ve been selling my auction cards on facebook and a little on ebay and I’ve got to tell you Magic players are not the funnest to deal with. They’re not as bad as Yu Gi Oh players, dozens and dozens of whom have asked me if my cards are still available to ghost me once I say yes. The magic players are richer and older and much more respectful but they’re always trying to hustle you for cheaper.

“You’re never going to get more than $70 canadian for your grim monoliths.”
“Yeah okay sure no thanks bud.”

get this trash out of here, I’m hoping for Uro myself, card is such a gift to ramp, gets you lands, buys you time with life gain, and then comes back as a fatty and gains you more life.

Wizards of the Coast has made an announcement where they state that they’re going to update the format early next week. The likely suspect is just an Uro, Titan of...