I’m going to build a tiny retaining wall - about 1’ high max. I’m planning on laying some bricks, but then I’m going to put some decorative ceramic tiles in the front of part of it.

Do I need to let the mortar of the bricks dry/cure for any time before I put tiles on? If so, like how long? I’m thinking maybe if the mortar shrinks it’d crack the tiles.

Assuming you’re setting the tile with some sort of portland cement-based thinset, no. It’s more or less the same thing as masonry mortar* and you’ll actually get a slightly better bond if you do it immediately after.

*Not close enough to use one for the other, but pretty much the same ingredients in different ratios

You think that wall is going to keep the cockroache out? You need bigger!

If he’s tiling walls it’s more than likely he’ll be using a ready made adhesive, not rapid set cement. At least I hope he is.

I’d let the wall dry for best part of 2 weeks before tiling for the reason you said MB, cracking. I’ve only a dozen years tiling experience.

I’m not sure if we’re using different terminology or if you have different products over there than what we have, but I’ve never seen a pre-mixed tile adhesive that’s rated for wet use. They’re generally frowned upon here and rarely used by professional tile setters.

Thinset isn’t a rapid-setting cement, it’s just standard tile mortar formulated for, well, thin setting. It’s available both with and without polymer additives, the latter becoming more common as it provides better performance with the newer waterproofing and uncoupling membranes which make the polymer additives unnecessary. 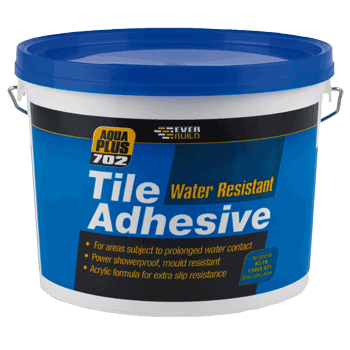 Water Resistant Tile Adhesive is a premium grade adhesive that can be used in areas subject to prolonged/permanent wet conditions and in areas of high humidity and condensation. Tested to EN12004 type D2T.

I have heard about the polymer stuff, never used it tho. Used the water resistant stuff ^^ in my own shower. Still standing 4 years later.

I believe I’ve seen tile mortar wet in a tub like that, but I have no problem mixing stuff with water and would get that probably just because it’s probably cheaper.

I’m really not at all worried about bonding.

Just about the tiles cracking and you guys disagree about that. Seems like if the thinset cures faster than the brick mortar I dunno – if the bricks move at all while they set – cracking?

It’s weird that seems to be a UK only product when the parent company Sika has stuff all over the US world.

The thinset and mortar should have about the same cure rate. They’re both portland cement based. If you’re worried about cracking (you shouldn’t be imo, especially not with a 12" wall), you can use a polymer modified thinset which has a bit more flex.

Yeah that is strange.

I hate tiling, I still get asked to do work and always refuse as it kills my body. Refused 7 sets of steps last month and just this morning my dad called (he’s retired 15 years and still gets hounded lol) with more work that I don’t need or want - obv said NO and to please stop asking.

My father was a master at his work (terrazzo layer, call him a tiler and you’ll have a problem lol), I know for sure it bothers him that I haven’t carried on with the trade he taught me. He feels like it’s the greatest gift he had to give ffs.

MB I’ve been away from the industry for quite a while and we don’t even use the same products here lol, so I’d just go with whatever Zikzak advises.

So I’ve had a small water leak near the peak of my roof, shows up during heavy rain. I have vaulted ceilings so no attic access which is making this issue more complicated than it should be.

I had a new ridge vent put on this spring because the gap that was cut for the vent by the previous owners was too wide which was causing a leak in a different spot. So the new vent stopped that leak but the new leak started a few months after the install and I’m assuming its coming in or around the vent. The roofer who did the vent thinks it’s happening because of the low slope (roof is 3/12 or maybe a little shallower than that) he wants to close up the vent and install box or turbine vents which seems like a terrible idea because I would need to a vent for each section. So I’d have like 10 fucking mushrooms lined up on the roof which seems bad.

I was up on the roof tonight looking at shit and noticed this little hole in the shingles, could something like that be the cause of this? It’s in the area where water is most likely getting in. I put some silicon sealant I had laying around in the hole, we’re supposed to get like 3 inches of rain over the next couple days so my fingers are crossed.

10 mushrooms or no leak.

I dgaf for appearance over functionality so I lol’d that you seem to care about how your roof looks.

Ridge vents are pretty rare around here. I don’t know if they are prone to leaking or not.

That hole doesn’t look like it goes deep, but if it does it definitely could cause a small leak. I’ve only been involved in a few leaks, but one small one was caused by a loose nail that someone must have stepped on.

Bathroom type caulk won’t last long there. If it doesn’t leak during the coming rain you should get some type of roofing sealant in there. Better, get a little square of metal flashing and insert it between shingles.

10 mushrooms or no leak.

I dgaf for appearance over functionality so I lol’d that you seem to care about how your roof looks.

I guess I’m more concerned with drilling a bunch of large holes in the roof and then causing a leak somewhere else. This seems to have worked fine for years so I’m wary of making a big change like that.

I believe ridge vents are the best way to ventiIate vaulted ceilings and since I live in MN ice dams are a big issue with poorly insulated and ventilated roofs. I’ve got a different roofer coming out to look at it, maybe it’s just a shitty install job or a simple fix

So I know little to nothing about home maintenance but have tried to acquire some knowledge over the years. Plumbing remains a mystery though. I noticed a good amount of water on my basement floor. Upon further inspection it appears to be coming from the basement ceiling, which is directly below my kitchen sink area.

I checked it out under the kitchen sink and sure enough it’s pretty wet, not pooling though like it is in the basement. It definitely was not like this last night, so it appears to have happened very recently which is good, I think. I know water infiltration/damage/mold can be a bitch to fix.

I have a garbage disposal in the sink that occasionally backs up if extra food gets accidentally washed off into it but a flick of the switch on and the water drains without an issue. It hasn’t been cold enough here yet to be concerned about frozen pipes exploding but does this sound like the case of a bad/leaky garbage disposal or a larger issue? I’ve got a buddy who is a jack of all trades coming to take a look but thought I’d get some advice from our internet posters too!

It definitely sounds like a leak from the waste side of the plumbing. From the supply side it would be a lot worse.

Alrighty, cool thanks. I did put some towels down and dried to the best I could for now. Doesn’t appear to be ongoing leaking but we shall see when someone takes a look that knows what they’re looking at.

I just dealt with this. A very common way for a disposal to fail is to crack and start leaking. If that’s what happened in your case it should be easy to tell though, there should be visible water dripping from the bottom of the disposal when you turn the faucet on.

I switched it out yesterday. It was a very easy job if you have a little experience with hand tools. I watched a 10 minute video on YouTube and completed the job start to finish in about 40 minutes. (I did not replace the throat at the sink because I replaced with the same brand but this is also not intimidating.)

If you are interested in trying a simple plumbing job yourself this is a great one to take on. It probably will save you about $100 over a handyman install.

@00cooler00, if you want any details on how I went about any aspect of this let me know. I am happy to walk you through it. There was only one momentary frustration and I figured out how to deal with it so I can also help you avoid that.