There was a request for a Not Like feature for posts. It doesn’t seem there’s a Discourse plugin for this, but there is one for something similar. I’m not really sure I’d be in favor of the Not Like button as a feature, but it’s a nice little project to do something in developing Discourse features and I’m thinking about working on it.

edit: Man - I can’t believe I got ponied on this when I started this thread just to post that.

I’m not dead set on it and could be wrong about it I suppose. I guess I like the idea for the same reason I ended up liking the like button. I think it it could diffuse dog piles a bit. There are times I’d like to voice my disagreement without adding another post for someone to have to answer if they are already engaged. I guess that can be accomplished by “liking” the post of the person who is already debating them. Idk.

For example, I can see it be useful to communicate consensus to me. If I post something like I want to be able to ad hominem attack as I wish, and people don’t agree, it is pretty easy to dislike that and I will easily learn my position is outside the norm. Further, if I DO ad hominem attack someone or make a hot take post that is misguided, people can let me know they don’t approve of the post without needing to explain it and I can do what I wish with that info.

Could it end up being a net negative if only used to polarize and tribalize? I guess it could. But that is not the tool’s fault really.

I am not sure that negative buttons are conducive to a friendly posting environment. I know another forum that has a „respectfully disagree“ button. I‘d prefer that over „dislike“.

I would definitely like more positive buttons. In addition to ‚like‘ I suggest “agree“, „interesting“ and „funny“.

I am not sure that negative buttons are conducive to a friendly posting environment. I know another forum that has a „respectfully disagree“ button. I‘d prefer that over „dislike“.

I would definitely like more positive buttons. In addition to ‚like‘ I suggest “agree“, „interesting“ and „funny“.

Yeah, that seems fine to me. If we start parsing out types of positive responses we gotta give enough options. Just one positive response reduces the need to be thoughtful and more will run into a place where we have to take a regretful cue from other social media. I think that is going to have built-in resistance. Personally, I am okay with a heart/ thumbs down as a catch-all, but I’m not super stubborn on any of it.

Does this not do it?

What button are you hitting?

What button are you hitting?

When you hit reply and then the text box opens, hit the speech bubble in the top left corner (beside the B)

Even if such a button did exist, I’d still prefer one button and one click to 2 buttons and 2 clicks

Even if such a button did exist, I’d still prefer one button and one click to 2 buttons and 2 clicks

It definitely exists on my laptop browser (Chrome) and on my iPhone. You don’t seem to have any formatting options such as bold etc. I’m guess formatting options might be hidden behind one of the icons on your screen.
What are you browsing on? 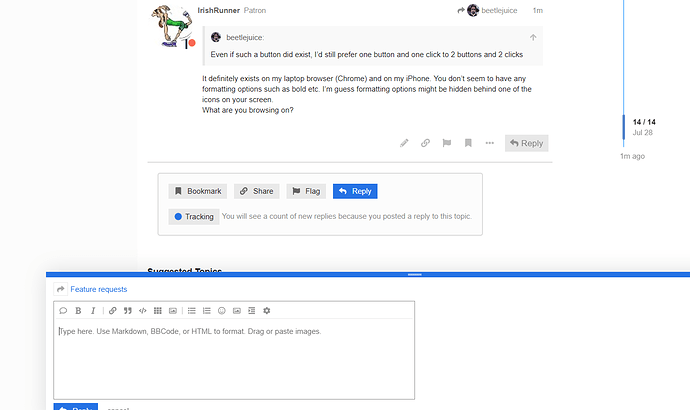 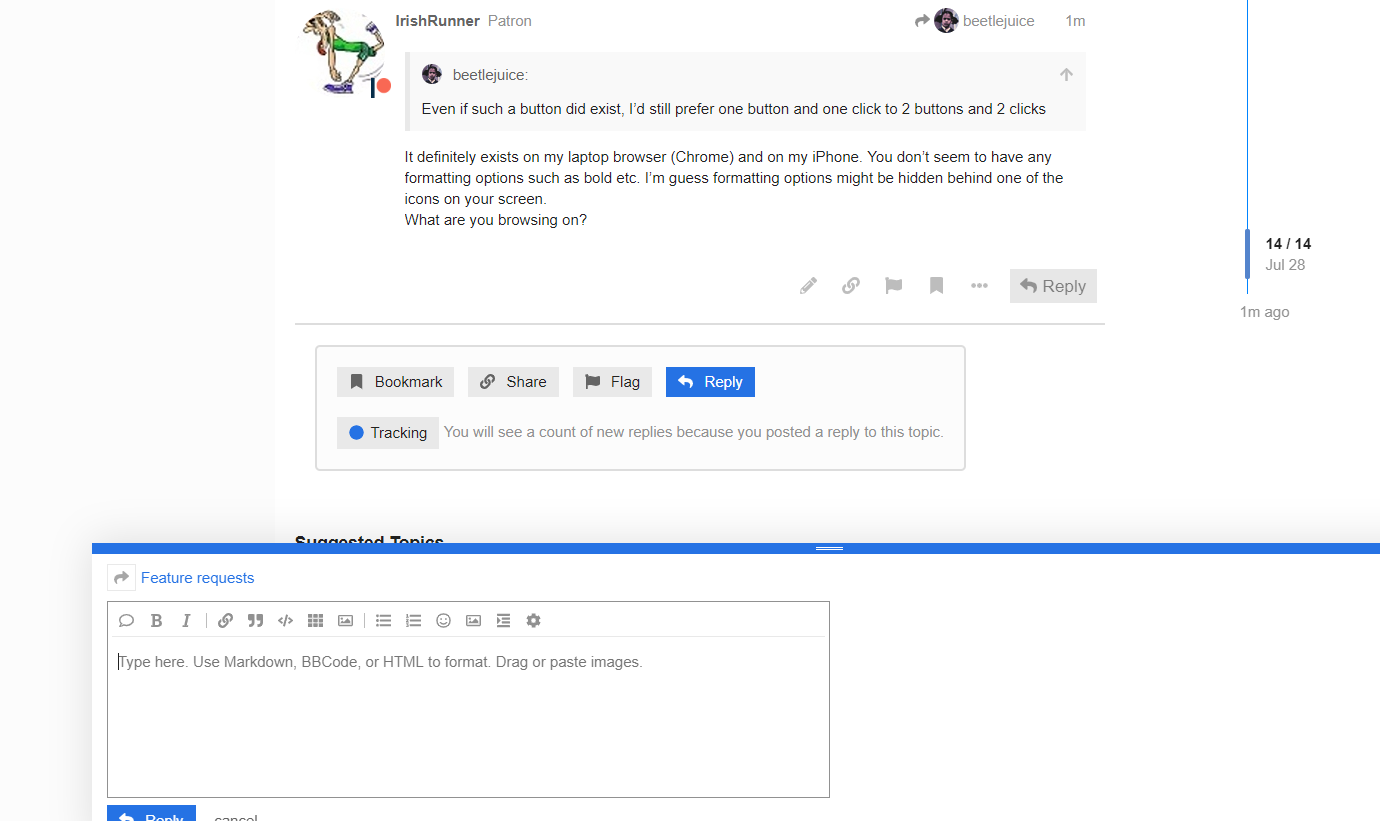 I got it as 2 buttons. Reply, then the little bubble. And the preview window shows changes live which is cool so you know it works and aren’t fiddling with bbcode as ninja edits when you’re doing something new.

But this is on Chrome/PC and not on the phone.

But, the one click, show it with the quote does seem like a good feature and I’m very glad you’re making an effort. Thanks.

Just getting started here. It’s going to take some getting used to. Here’s some things I’d like.