What’s the angle-shoot here with WOAT-types like Gaetz and MTG being so vocal about freeing Britney? I’m legitimately stumped.

Sometimes bad people are right about some things.

Maybe it’s a sign that freeing Britney is wrong.

Not saying they are wrong. Just that I can’t figure out what they think is in it for THEM to be harping on it.

She is extremely famous and they’re trying to latch onto these stories for publicity. Also it’s a white woman from Mississippi whos life is being destroyed by the nanny state obv

I admittedly know little about Britney beyond what’s known by the general public. However, I do understand competency, which is not a solitary concept but rather is situation dependent.

For example, a somewhat reasonably functioning adult may be found incompetent for financial matters if due to a mental condition that person in unable to manage his or her own money, despite being able to at least live independently and possibly even hold a real job.

On the other hand, competency over one’s own body (e.g. making medical decisions) is the most basic level of competency. Even individuals who are psychotic or moderately mentally retarded may be afforded the right to refuse treatment, avoid confinement, etc.

Consequently, if it’s actually true that someone functioning as well in the world as Britney Spears is not allowed to approve her own medical care or come and go from her home as she pleases makes me think that there’s some MAJOR FUCKERY going on here.

MTG probably thinks she is the Brittany Spears of politics.

There is a movie about this that tilted the hell out of me. Evil woman pays off doctors to say old people are incompetent and become their whatever to manage their finances and basically bleed them dry. You know that shit happens in real life too. Mega tilting

I watched that a few months ago. Fucking nauseatingly infuriating knowing that that most likely goes on every day in the real world. 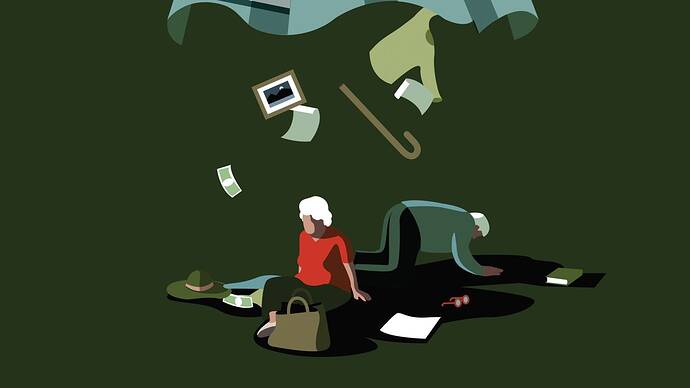 How the Elderly Lose Their Rights

Guardians can sell the assets and control the lives of senior citizens without their consent—and reap a profit from it.

I find it extremely hard to believe that a male pop star behaving the way Britney did would wind up in this insane indentured servitude to his father.

That’s different, boys will be boys after all.

I watched that a few months ago. Fucking nauseatingly infuriating knowing that that most likely goes on every day in the real world.

Don’t know the specifics of Britney’s case, but at a minimum it looks like her lawyers were fucking up and she was in no condition to help herself (by like buying a basic book on conservatorship).

She’s a Christian is probably the angle.

If you read her court statement she mentioned not really believing in therapy but “taking it to god.”

I think she should just consider telling the lawyers to fuck off and refuse to perform.

She could raise a lot of money through social media if they actually follow through on their threats.

Yea the movie was obviously terrible and misrepresentative, but the general concept of abusing the elderly pissed me off. I’m glad the real world isn’t as absurd as the movie.

What’s funny is I saw a headline where the court is furiously trying to track down who leaked the video. All the while doing nothing for Ms. Spears.

As always the court has their priorities straight.

The horror that was given a public voice… we better hunt down the person who exposed a bunch of slimy people and a sus judge.

Yeah but Britney makes millions of dollars every year and has done it forever. She seems to fit all those categories of competency.

Her dad took advantage of her when she was at her most vulnerable and once he got his hooks in he used the system and secrecy to keep her on his leash.

Even if he started with good intentions when she was struggling it’s pretty clear that should have been dropped awhile ago.

But there is more rotten in her case than just a bad dad. The courts have been complicit. Not allowing her to have her own representation has to be unconstitutional. And as I noted the thing the judge is most upset about is it was recorded and leaked.

I understand why a court room has these rules but the courts in California and the whole conservatorship system in California needs a bright light shined on it.

She has been an actual slave for over a decade. Even if the court decided she still needs a conservatorship there is zero reason for it to still be her dad. Zero reason.

The whole thing is just ridiculous and maddening.

Can I get a cliffs notes on how he can have this power still?

She is still not being allowed to get her own legal representation ten years plus in.

People with a vested interest of continued enslavement ultimately get to make that call.

Plus I don’t know the laws in California but it’s not clear she was ever incapacitated to an extent she should have had a conservator to start with. She was clearly having some psychological issues but I am hard pressed to believe it was so severe to have started and I don’t believe it is at all now something that is needed.

And the extreme lengths and control by the conservator are obscene and regardless of the law in California can not stand.