What do you disagree on with your preferred candidate?

It’s rare to agree with someone completely on every single issue. For your preferred candidate, what stances do you disagree with them on and why?

For me, I strongly support Bernie, however I disagree with his stance on phasing out nuclear power. I think that we should even be expanding/researching it. His concerns about safety and nuclear waste are understandable but they pale in comparison to the current gas/oil deaths/waste.

When he talks about phasing out nuclear power, in countries where that has happened it has shown to increase the usages of coal much more than increase of renewable energy.

The filibuster needs to be exploded, bern

Nobody talks about expanding the Supreme Court or DC statehood

Disagree with Bernie that a woman can’t win in 2020

I’m not a fan of several of Bernie’s policies/stances. Other than the 2 mentioned here (nuclear, filibuster), i’m not really sold on his job’s guarantee. Based on what i’ve heard so far, I believe Yang’s UBI or similar is a better solution.

His position on nuclear is not really relevant. Allow it or not, they still won’t be built.

Anyone else not like no copays on Medicare (not actually Medicare) for All?

His position on nuclear is not really relevant. Allow it or not, they still won’t be built.

So transforming our economy and energy sector through the Green New Deal – relevant and doable. Building new nuke plants – not possible, not relevant.

Maybe, but the main reason nuclear power isn’t feasible is that people like Bernie and AOC oppose it. If environmentalists were collectively pushing for more nuclear power you’d have a pretty broad coalition of people who support it.

What was so compelling about your post? You just had some more words? I didn’t notice anything other than conjecture.

Nuclear supporters make the same arguments they did when renewables cost literally 100 times as much as they currently do.

Bernie used to be more pro-gun in the past, for pragmatic reasons.

That’s not right. You just make the same argument because you don’t know what you’re talking about. you’re also wrong about who opposes nuclear. Everyone opposes new clear. Some people are okay with it if it’s far enough away from them and other people have to deal with the waste, but no one is okay with it being next to them. That’s not just AOC in Bernie. And you don’t get to live in your imaginary world, you have to live in the real world where it will be difficult to build any because of all kinds of people, it will be impossible to store the waste properly because of all kinds of people, and what does happen to the waste will be terrible because that is what has happened to the waste in the past and that is what will happen in the future.

Renewables with storage are already cheaper, and nuclear waste is sitting in rotting containers on the beach that can’t be moved and you want to build more nuclear power. 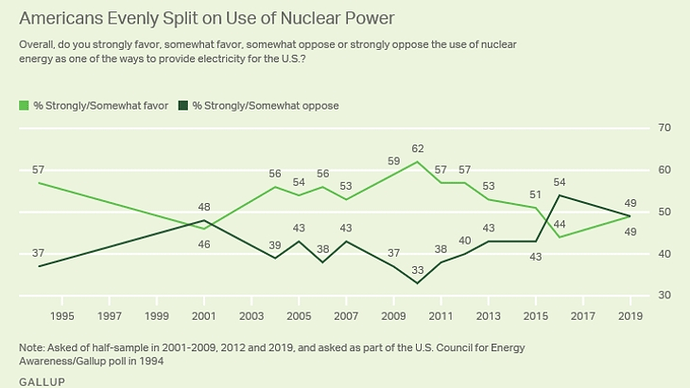 Sometimes you’re very stupid. Everyone opposes plants being built near them.

if you say so. Wouldn’t bother me one bit. I’d rather live inside a nuclear power plant then near a coal plant. And to the extent that’s true, it’s due to decades of misinformation from the media and environmental groups vastly overstating the problems with and dangers of nuclear power. All while we cook the planet burning fossil fuels. nbd.

Bernie’s still too pro gun as long as he doesn’t want to abolish 2ndA. No need to immediately stop using nuclear but building new nuclear plants instead of investing that expense into renewables is dumb. Medical copays are terrible idea and will deny a range of health care to some.