Stuff: the Things We Acquire and Don't Get Rid Of

Setting boundaries with your parents, especially their grand parenting is brutal.

As a long distance grandpa I try very hard not to place expectations like what my parents did at times. You’ll have to ask my son (and now my daughter next year) how I’m doing.

Now that you have a bigger place expect your parents to start emptying their attic/basement/garage by bringing it over to you. Your old stuff, family heirloom stuff, and surely some pure crap. Always special when they cram it in your car when you go to visit them.

My wife owned a small house when we lived in upstate NY. She already got a literal moving truck packed full of this shit from her folks, much of which IS STILL IN BOXES AND WE ARE STILL MOVING AFTER FOUR MOVES. We have, like, four huge tubs and multiple boxes full of literal fabric scraps that my wife is unwilling to part with and that must have nearly 10000 miles on their odometers.

My parents aren’t that bad about this, but it’s happening. Last year I got a box full of “sentimental” Christmas ornaments from, like, when I was a baby. Yo, they aren’t sentimental to me. They’re meaningless to me. They were sentimental to you. Why do you think I even want this box?

Put them in an Amazon box and then put the box on your porch. Technically they were stolen!

Man this is a worthy detail topic. I just was told I shouldn’t throw away a framed wedding picture of my (bitterly) divorced parents that even makes my wife squeamish to look at. But nobody wants it. Nobody. I have to keep it forever apparently, though, because it’s something that happened in history. I told my sister we are all the proof needed.

Seems like a no-brainer to treat that thing like a Confederate monument: take the picture out of the frame and into a photo album, and then either trash the frame or put something good in it, depending on whether you like the frame.

Just discard it and play dumb. Nobody is auditing this stuff anyway.

Just discard it and play dumb. Nobody is auditing this stuff anyway.

The only possible good thing about parents dumping your old stuff on you is if you inadvertently saved a bunch of 80’s nostalgia crap that people buy on ebay. I’ve netted $1,300 already for maybe 8 hours’ worth of effort listing and shipping things that had exactly zero value to me.

Exactly what I’m doing! There is a second matching frame that has my mom alone in her wedding dress looking eerily like my daughter so maybe one day we will have a picture of her to go in it this one.

My step mom threw away all my garbage pail kids, comics, original Nike flights and Jordans (!!!) and table top Mini Pac-Man, frogger and donkey Kong games. I can’t even bring myself to look up the values.

My wife’s mother passed away around 20 years ago. We have a bunch of stuff that came from her that I guess my kids are going to have to deal with. First thing that comes to mind is “Papa’s Piano”. I think it was my wife’s great-grandfather’s. It’s in our living room. Nobody plays it, ever. Nobody here knows how to play it. But that thing ain’t going anywhere.

I still have my Garbage Pail Kids cards and have not looked up their value.

Yeah, for all the boxes I ended up with it’s depressing to think of what wasn’t there - multiple Atari consoles & games, an original NES, a ColecoVision, Commodore Vic-20 (with tape drive!).

I would be surprised if there is anyone worse than my Mom.

My parents recently moved into a new house and were going through all their “stuff”.

She asked me if they should keep this. It’s some stupid thing I colored in pre-school. That’s just a small taste of the completely worthless crap she’s hung on to. 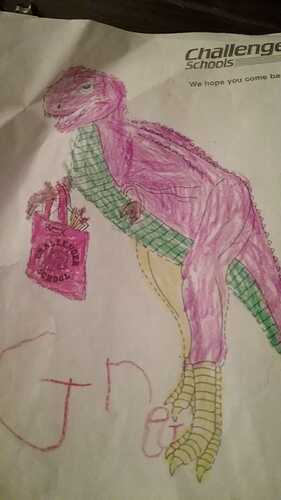 Reminds me of a morning radio bit I listened to, oh, like 15 years back. The DJs one morning were talking about things you should never buy new, and one that came up and was met with unanimous approval was aquariums. They figured there were so many people out there with unused aquariums out there, you should be able to get one free without issue should you ever want one. So, they opened up their phone lines and were inundated with people wanting to give away aquariums, and I think they matched them up with some listeners who wanted one.

The next morning or maybe a couple days later, they wanted to one-up themselves, so the challenge this time was pianos. I think they legitimately found a non-profit musical organization that could use one or more, and sure enough, they had like 6 callers all of whom were more than willing to give away their pianos for free provided the person wanting it was the one responsible for hauling it away.

My folks have a piano. I suppose that day is coming.

I don’t think I ever had too many of the now-valuable toys, but one I know I have and that my parents should still have is the Lego pirate ship with the functioning, spring-loaded cannon. Those were only around briefly before they decided they were a safety hazard, and now they’re worth hundreds. Made for some awesome sea battles when I was a kid.

Last time I visited my folks, Mom asked me to take or toss what was left in a few boxes I had in their basement. Worthless shit like a college textbook on marketing from the mid 90s, pre internet, very relevant now, glad I kept it for decades.

Gave all my old baseball cards to my nephew. So he’s selling them to make some money for himself. Apparently there was a Roger Clemens rookie card along with a few Barry Bonds rookies too. I still remember trading for the Bonds cards, sitting at my kitchen table with the neighbor kid negotiating back in around 1990.

I still remember the day adolescent me and my friend decided to light his Millennium Falcon on fire with nail polish remover and throw it out his attic window.

My mom sent my wife and daughter some socks she bought and didn’t want. They weren’t fashionable but they told her that they “used them all the time”. (As cleaning rags).

Another package for me had my dads stretched old boxers.

Always an adventure opening this things up. Miss her tho.

From my mom it is mostly clothing. I have to say that some stuff I absolutely adore like dresses from her youth. I wear them a lot and they are something special nowdays.

But some clothes… The difficult thing is that she always insists that I wear it. Like this jackets with shoulder pads from the 80ties. She kept them in an impeccable state and is convinced that I look super professional in them in meetings. My only saving grace is that she doesn’t see what I am really wearing.

As I moved last time she pushed on me their old wardrobe. That would be fine if not my dad, who completely destroyed it in the process of disassembling. So I have transported a bunch of boards and planks that used to be a wardrobe for 700 km only to put them here at the curb. And I can’t tell that to my mom because of her blood pressure.

It is a really difficult thing: How to say “no” in such situations.