Here is the big one.

First draft and results of the vote: 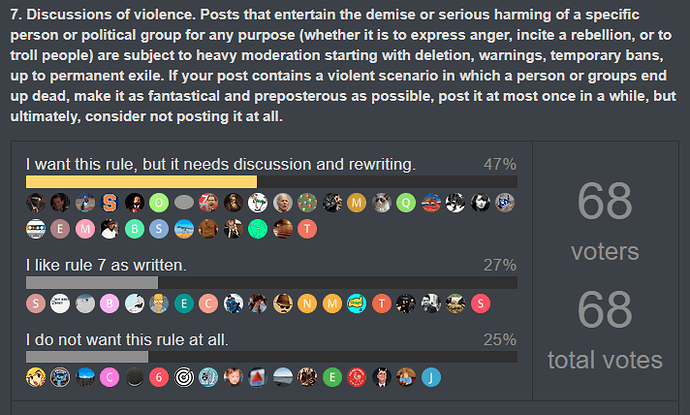 Again too open to interpretation/enforcement by mods

Yesterday I had the epiphany that I still wan‘t to make guillotine posts. I am against violent rhetoric in general though. No idea if this means I am hypocritical or if there can be any coherent rule that allows the violent rhetoric I like but disallows the one I don‘t like.

Again too open to interpretation/enforcement by mods

There are a lot of reasons to not allow talk of violence.

It’s an interesting topic to me, but one I am willing to forgo in order to get all the other things I like about this site. It does not need to be everything to everyone, so if one wants to make those kinds of posts online or have those kinds of discussions with people they can certainly find a place to do so.

Enforcement is going to be another discussion. There just is no way to eliminate mod interpretation. That’s kinda what they are here to do, but we should write the rule in a way that best expresses what we would like to see as a group. After that, I really feel like if someone is regularly getting close enough to the line to cause questions of interpretation by mods they are being disrespectful to the entire group.

We already had that moron on 2p2 claiming we are a hate group or whatever, and as assinine as that is the world is pretty fucking ridiculous right now and nobody knows what is going to happen next.

The opinions of morons should have zero impact on our rules.

Interim Injunction Order granted by the High Court against promotion,...

The Secretary for Justice as guardian of the public interest applied to the Court yesterday (October 31) for an ex parte injunction (High Court Intended Action 202/2019) to restrain...

It’s not their opinions I’m concerned with, it is the repercussions of them. And there are a lot of morons just like them who have different amounts of real power. I gave a real life example of it that people are being forced to give their social media accounts and passwords at the border. Regardless of how fucking stupid it would be to classify this as a hate site there are morons who would make the argument it is. That’s my point. Staying clear if anything that could be interpreted that way is a consideration. I truly do not know how big of one it should be, but as Non American who crosses the border regularly it may matter to me some day.

What goal should have a discussion of violence?
From which place does it come?

Which really negative consequences on the surrounding does it have?

I filed NBZ in a drawer “dude needs help”. And so for me he doesn’t cause any drama. I take him fundamentally different than someone who is in the stable sane place.

Nevertheless I think that no amount of mental health problems justify his attitude “I DGAF what harm my words can cause. I DGAF if someone feels driven by my words to actually execute violence”.

If we step back from NBZ… I think it is not bad if people actually think before saying something. And I fail to see which productive goal violent rhetoric can have. I understand some trolling… But again…It requires a significant trolling skill to make such stuff funny and not tasteless.

Pretty much what I said in the rule 6 thread.

Advocating illegal acts of violence should be “worthy of a moderator’s attention”, but it’s fine to urge people to go on demos/uprisings otherwise.

Saying that you’d be glad if some terrible person suffered isn’t equivalent to advocating it.

Just like with rule 6, I recommend we start with stuff we can agree on around the perimeter (if there’s any such stuff) and work in. Stuff like “plz die of a heartattack” is something I personally don’t love seeing but it is not gray area to me. Wishing for somebody’s natural demise should be allowed unless I suppose it’s turned into a form of LC trolling.

Next time he releases his annual physical and you say #TeamPlaque and get 40 likes, that’s fine imo.

On the way not fine end of the spectrum are posts that play around with the scenario of the killing/execution of somebody, often explicitly stating what the violence will be. For example “If the President of Zembla resisted leaving office, he would likely get shot” or “If the President of Zembla went trick or treating dressed as zombie Mr. T, a white cop on patrol may mistake him for a threat and draw his weapon”; not feeling particularly creative atm and I have things to do today, but yeah the point is you can have as jokey or as hypothetical a setup as you want but if the punchline is your political enemy dies by violence, that should be moderated/deleted/warnings and so on.

I completely and utterly disagree with this. How in the world is a post “If the President of Zembia resisted leaving office, he would likely be shot” something that should not be allowed on a politics forum (our politics forum)? I am truly dumbfounded that anybody thinks that.

“The only way the US will ever get meaningful gun control is if 20 Republican Senators have children killed in school shootings.” That is a vibrant way of expressing a particular sentiment about gun control and who is currently preventing gun control legislation in the US.

We already have a rule (Rule 6, under discussion next door) which prohibits posts making threats and inciting violence. This rule is WAAAAAAAAAAY too vague and subject to moderator judgment (aka abuse).

“The only way the US will ever get meaningful gun control is if 20 Republican Senators have children killed in school shootings.”

That is one thing. Completely 100 % different thing is the same sentence with something like “I wish it would finally happen”.

I completely and utterly disagree with this. How in the world is a post “If the President of Zembia resisted leaving office, he would likely be shot” something that should not be allowed on a politics forum (our politics forum)? I am truly dumbfounded that anybody thinks that.

What is being communicated by that post? Is anybody unclear about what would happen to the President of Zembla when he is no longer the legal occupant of the office? He would leave, and if he didn’t leave, he would be arrested/removed, and if he resisted arrest, he would get aggressively subdued, and if he reached for a gun, he could get shot. Seems to me that otherwise pointless posts about heads of state getting killed do not belong on a politics forum.

“The only way the US will ever get meaningful gun control is if 20 Republican Senators have children killed in school shootings.” That is a vibrant way of expressing a particular sentiment about gun control and who is currently preventing gun control legislation in the US.

It’s going to be basically impossible to state a rule that covers gray area posts, although imo this is not a gray area post. It’s basically fine since it’s targeting Republican apathy/lack of empathy, something that may change if they were victims of a tragedy that happens way too often to other families.

Now, if the post was “The only way the US will ever get meaningful gun control is if 20 Republican Senators were killed in a plane crash” it would be right on the line of something I may want moderated. Yes, there is no explicit call for violence, yes many people die in plane crashes, but it’s an otherwise pointless scenario in which your political opponents die to facilitate your own political priorities.

We already have a rule (Rule 6, under discussion next door) which prohibits posts making threats and inciting violence. This rule is WAAAAAAAAAAY too vague and subject to moderator judgment (aka abuse).

I’m open to the idea that depending on how rule 6 hashes out, it may turn out that this rule is not needed. I’m also probably fine with removing all the mean things a moderator will do to a poster if they violate this rule. But I’d like the rule to communicate that you as a poster are in a problem area when you start posting about violent scenarios where your political enemies get killed. Your posts may get flagged, they will receive more scrutiny, and if they’re pointless or too egregious then moderation is called for.

But how is this way too vague when determining what bad faith trolling is and what is a personal attack is are both much more vague and more prevalent? I tried to make the rule a decent amount less vague by limiting this rule to posts that “entertain the demise or serious harming” which is a small subset of posts. I originally had something about ‘heads of state where some of us live’ because I have in mind limiting potentially legally problematic posts; I don’t know here, that’s why I hope @lawbros will chime in, I don’t think it’s legal here (US) to edgelord around killing/harming members of the government, or at least it could expose you to a chitchat with someone with a badge.

I thank you for your long and meaningful reply. I am still 100% diametrically opposed to your view, but reasonable people can have fundamental disagreements.

All analogies are terrible and here is another. One town has a sign posting the speed limit of 55 miles per hour and its police officers ticket anyone they think is going over 55 miles per hour (maybe their speed-reading equipment is far from perfect and they have to use judgment). Another town has a sign saying Don’t Speed and its police officers ticket anyone they feel is “speeding”.

Every rule/law that is so vague that nobody really knows what is allowed/disallowed invites “abuse” by those tasked with enforcing the rule/law.

I am fundamentally against this rule in any flavor (in case that hasn’t been made clear yet), but if the community wants a rule in this realm I would encourage making the rule as specific as possible.

I’ll leave it here then, but it seems to follow from your post that there can’t be rules about moderating personal attacks or trolling either, at least to me each of these involves vaguer judgment calls than the line I’m trying to draw here, which is just: don’t joke/troll/woolgather about your political enemies getting killed, it’s low content, not impossible that it could be mistaken for intent, and makes a quarter of our posters very uncomfortable.

As I said in the other thread:

I don’t think it’s legal here (US) to edgelord around killing/harming members of the government, or at least it could expose you to a chitchat with someone with a badge.

If we go by Brandenburg v. Ohio, abstract advocacy of violence and other illegal activity is constitutionally protected speech. The government can only punish speech that fails the imminent lawless action test. Not only does the speech have to advocate immediate lawless action and not just at some indefinite time in the future, but it also must be likely to induce such action.

Yeah, to be safe, I’d rather go by the British Treason Act 1351 which made it a crime to “compass or imagine” the death of the King.

You do you though.

Trump’s not a king.