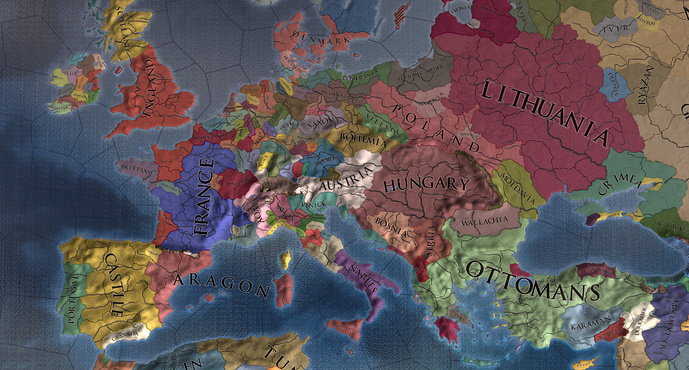 The greatest game of the 2010s is on sale with all DLC for $17 (or less, if you don’t want all the DLC) at Humble Bundle, and Unstuck is getting into it!

Post questions and your sexy maps and game stories ITT.

From the old thread

Weirdly it gives a scary perspective on super evil decisions. Like if I don’t colonise America quickly then the UK is gonna beat me to it and become super powerful. You want to do it peacefully, there’s even a bonus if you keep the natives around but the 4th or 5th time they rise up and destroy your colony and set in you back like 3 years of progress you start thinking fuck it just murder the lot of them.

Or your country is falling apart due to low religious unity. You want to live in peace with the dirty prots but a good purge really brings people together and makes the Pope a good friend giving you +1 prestige per month! Bring on the Spanish inquisition then I guess. We can always kill anyone who revolts.

Things like trade power etc actually “force” you to make historically accurate, shitty decisions. You wouldn’t do it if it were real people. But did the rulers of old see their dominion as full of real people or were they just looking at a big map and trying their best to paint it all yellow?

You can set your native policy so that there won’t be any uprisings. Or you can park 3k or so troops there as you’re colonizing and that will usually keep them in line.

Yeah but if I’m colonising 6 places at once from australia to saskatchewan while also trying to shut down the milan venice alliance it’s far easier to go around murdering.

You have SIX colonies forming at once? How do you have any income??

I took genoa, set it as my trade hub and funneled the entire new worlds wealth through it. By the end I had 1k gold per month from trade. 98% of the trade power (FU papal state) in a trade hub 10X more lucrative than any other in the world.

What’s the point of having colonies if they aren’t bringing in cash?

Ah ok. I thought you were just starting to colonize. If you’re deep into it you can pull that off without colonial maintenance eating up all your ducats.

Once they’re completely settled (1000 population) they’ll start paying for themselves and then netting you ducats. While they’re being settled they’re costing you money because you have to funnel cash into them to get them started.

Once you’ve settled five provinces in a region (not including trade companies), the collective colonies will form a colonial nation, which will be your vassal but it self governs and they will start colonizing on their own. You can still help them colonize issuing your own colonists if you want your CN to grow faster. This is helpful if other nations are also trying to gobble up land in the region. Once one of those colonies reaches 1k pop it will become part of that CN. Of course you can always just wait for the AI to colonize the land and then take it by force…

If you have the Conquest of Paradise DLC you can play as the CN if you want.

Also worth noting: The AI will only colonize into contiguous land. So for example, if you settle five colonies in eastern Australia and a CN forms there (if you’re Spain it’ll be called “Spanish Australia”) the AI will keep colonizing until there is nowhere left to go. But it will never colonize Western Australia or the islands of New Zealand, because those areas aren’t connected to the homelands. You will have to send one of your own colonists to those areas to get them started. After that the CN can then spread into those areas.

I have all the conditions met to claim throne in Portugal, but we are members of the same dynasty so I can’t. What does this mean? How do dynasties work and how do I have a different one?

That sounds odd. Being in the same dynasty should be a condition to claiming the throne, not something that should prevent it. Is this an Event, if so what is it called?

no I am trying to hit “claim throne” in the diplomatic options. It says we are members of the same ruling dynasty so I can’t.

Combat is weird. I invaded morocco with 2 16 stacks, he just had a 15 stack. The 15 stack wiped the floor with both of my guys. No rhyme or reason. I had a good leader, I have everything invested into military, the recommended infantry/cavalry ratio, etc. Are some of these fights just total coin tosses?

That makes sense. You have to declare war on them and use the ‘personal union’ casus belli.

Did the fight happen as you crossed the straight (the red lines connecting morrocco to iberia)? That’s one of the worst defensive modifiers to be on the wrong side of in the game fwiw.

Also generals matter a lot. If they have a good 2 star (or god help you a 3 star) with a lot of shock pips and you have a bad one star with 0 shock pips you can totally lose a 2:1 battle. There absolutely is a good bit of RNG in combat.

The reason why I was ranting about getting +x infantry combat bonus early in the video games thread and talking about ‘space marines’ is because if you do it right you can create armies made up of SIGNIFICANTLY superior troops than your opponents as the game goes on. Before you know it you’re crossing rivers into mountains outnumbered 2:1 and winning battles easily. Similarly if you invade countries that have lower military tech levels than you (their military tech level is in the diplomacy screen) you’ll often roflstomp your enemies in very lopsided ways. If it’s 2+ levels of military tech it’s basically always a slaughter unless they are really really good at war. (in the late game it’s possible for people to stack a lot of troop quality modifiers and stay scary even a couple of levels behind… this is particularly risky in asia when they have a lot of troops AND good war ideas so can afford to trade you 1.5:1 and consider it a win)

Always always always make sure you aren’t out teched before warring someone else. It’s a significant disadvantage and is very rarely worth it even if you win because of casualty rates not being equal. Also obviously when you tech up look and see if any of the people you want to fight haven’t yet. Those are good inflection points to use to wreck people.

It was just a bad roll. I reloaded a save and did it over and wiped the floor with them.

I went over my force limit to deal with their big stack which retreated into the bottom left of their country. I was in position to take every territory (i occupied about half) but I was hemmorhaging money and rebels back in Granada were about to pop up so I just sued and took tangiers and 1 other province. I figure I can go back and mop up the rest later. That was a lot easier than the first time I tried it. Must be hard on iron man.

Now I’m allied with france just because I’m bored. Relations with france/portugal hit 200 and I’m like 175 with aragon. I don’t really know what to do next other than rebuild for a few years and then go back to morocco to finish what I started. Havent gotten the wedding yet.

Is it normal to just sit around for a year or two at a time? or longer? Because I feel like a lot of what I’m doing is that.

What year is it?

Your first idea group in this spot should be exploration and you should be planning to go build colonies hard.

No idea how to pick ideas. They’re all unclickable.