My jaw is on the ground after reading a short article in the November Scientific American titled “The Inescapable Casino.”

In a market economy, slight imbalances in prices will inexorably accumulate all the chips into the hands of a few – oligarchy. As I understand it, the authors’ simple mathematical model describes actual inequality around the world to .33%.

Imagine a group of people at a yard sale all starting with $100 in wealth. They then begin random transactions with each other which have a moderate imbalance – they either gain or lose a bit more than the real value of an object.

Flipping a coin, we either gain 20% or lose 17% of our total wealth in a given transaction. All of us would take that bet, no? But watch what happens, on average, in ten transactions: 1.2x1.2x1.2x1.2x1.2x.83x.83x.83x.83x.83 = 98. After ten transactions, we retain 98% of our $100 wealth, which is true on average for everybody at the yard sale. As I understand it, the $2 loss flows to a few people who get lucky (or slightly enhance their luck by inventing Microsoft) – rinse and repeat through trillions of transactions.

If we are the lucky bear positioned at the fastest part of the stream where we benefit from the greatest volume of transactions, we will be the Walmart of salmon fishing.

The authors argue that the natural flow of wealth upwards can achieve phase changes similar to water boiling. “the presence of symmetry breaking . . . . [denies] the idea that wealth accumulation must be the result of cleverness and industriousness. It is true that an individual’s location on the wealth spectrum correlates to some extent with such attributes, but the overall shape of that spectrum can be explained to better than 0.33% by a statistical model that completely ignores them.”

“these mathematical models demonstrate that far from wealth trickling down to the poor, the natural inclination of wealth is to flow upward, so that the ‘natural’ wealth distribution in a free market economy is one of complete oligarchy. It is only redistribution that sets limits on inequality.” Go Bernie.

Link to the article 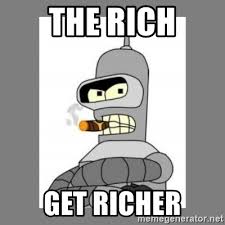 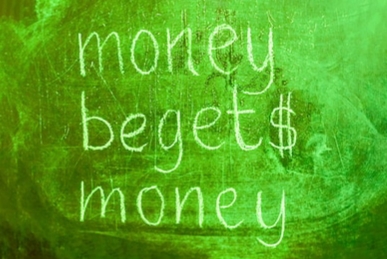 Possible counterpoint: that example assumes you’re forced to risk 17% of your wealth. If you have the option to choose your own bet size, you can achieve positive growth with a smaller bet. The growth-optimal wager is 7.5% (see Thorp’s paper on the Kelly Criterion).

Counterpoint to the counterpoint: perhaps the assumption of a forced overbet actually makes the example more realistic, given the measures poor people are forced to take (such as high-interest loans).

Thanks. I have print copy.

Possible counterpoint: that example assumes you’re forced to risk 17% of your wealth. If you have the option to choose your own bet size, you can achieve positive growth with a smaller bet. The growth-optimal wager is 7.5% (see Thorp’s paper on the Ke

It’s also goofy to think about a closed system of people all engaging in this coin flipping process, where everyone loses money on average, suggesting that it all bleeds out to some unspecified party? I’m not sure what this is supposed to be informative about.

I don’t think the idea is that it bleeds out. It doesn’t leave the system it’s just that one person by chance will end up with all the money.

I don’t think the idea is that it bleeds out. It doesn’t leave the system it’s just that one person by chance will end up with all the money.

Then they’re using a misleading definition of “on average”:

After ten transactions, we retain 98% of our $100 wealth, which is true on average for everybody at the yard sale.

If it’s true for everybody that the average retained is 98%, then there’s 2% per person flowing out of the system. If that’s not what they mean, then I guess I don’t understand the language at all.

Flipping a coin, we either gain 20% or lose 17% of our total wealth in a given transaction. All of us would take that bet, no? But watch what happens, on average, in ten transactions: 1.2x1.2x1.2x1.2x1.2x.83x.83x.83x.83x.83 = 98. After ten transactions, we retain 98% of our $100 wealth, which is true on average for everybody at the yard sale. As I understand it, the $2 loss flows to a few people who get lucky (or slightly enhance their luck by inventing Microsoft) – rinse and repeat through trillions of transactions.

Isn’t this just percentage change word games? Multipliers of 0.83 and 1.2 are close but not equal relative percentage changes when framed from the same direction and I suspect were carefully chosen precisely because of that.

If we set the relative changes to be equal then it’s EV-neutral asymptotically:

The first trial is a good bet. But the second trial is not. That’s because if you won the first trial, you’ve now got $120 to bet, but your odds of a good outcome are now only 4/9.

I don’t follow. Each flip is independent and the chance is 50% regardless of the previous outcome. Each win pays out +20%, so if you win the 1st two flips, your capital will be 1.2 ⋅ $120 = $144. Each flip is definitely +EV. The only problem is if your wager is too large, your (log) growth is negative despite your EV being positive. When overbetting, your average outcome is still profit, but your median outcome is loss and if you repeat the wager enough times, you’re guaranteed to go broke.

The “transactions” (wagers) between two agents are only symmetrical when they have equal holdings. Otherwise, the wager amount is based on the smaller of the two holdings. So the “richer” agent is wagering a smaller percentage. FWIW, this was a point of confusion for me at first, until I read the article.

The authors have a very strange idea of what goes on at yard sales.

Flipping a coin, we either gain 20% or lose 17% of our total wealth in a given transaction. All of us would take that bet, no?

Let me say it a different way: No.

I forgot the transactions are among people, not against a casino.

So I guess the article is saying that when swapping out partners and repeating the transaction, the poorer person always gets the +EV (but -EG) end of the deal? (It’s unclear what happens when their wealth is equal, but that’s rare anyway.)

Hm I’m not seeing the point of this model. Obviously if you repeat a game of chance where no party is at an advantage, the end result is one person with all the chips via dumb luck (regardless of %-based bets or flat dollar-amount bets). That’s not ground-breaking, it’s Random Walks 101. I feel like all the authors did was beg the question.

The point of the model is that it supposedly explains some extraordinary amount of actual empirical inequality using the One Simple Math Trick They Don’t Want You To Know About as opposed to, say, all of the other models that have tried to explain it.

The initial hypothetical is an open system but the simulation between trading partners is closed so linking them together as easily as they did is deceptive.

The initial betting pattern is similar to a reverse Martingale betting strategy. Whoever is taking the other side is making -EV bets but effectively coming out ahead by Martingaling you. They have an added advantage though given that they’re forcing you into bet sizes which decrease the odds of seeing a catastrophic run that forces them to realize the -EV bets they’ve been making as the game goes on. On top of that they’re assumed to have infinite cash. The result is a neverending conversion of their infinite Sklansky bucks for your real bucks. An actual simulation running the given numbers could easily put the dealer in the hole by millions of dollars before returning to bankrupt the player.

Size of the bet doesn’t change much as long as it’s a fixed percentage of the player’s bankroll and the difference between the win and loss payout can be multiplied to a value <1. The 7.5% doesn’t really apply because there is a delta for any risk % > 0 where this holds (-$7.50 on losses/+$8 on wins for example). The spread needs to be closer when you’re risking less though.

As MaxCut just mentioned, in their simulation the people who get lucky early end up wagering a smaller amount of their stack as a percentage when gambling with the poorer people. They’ve also jumped to an even model because I guess you kind of have to when the other side of the bet is another participant rather than an abstract dealer type. It’s not hard to see how people who are betting significant percentages of their stack in a zero sum game will reach ruin before someone betting less.

It’s also not particularly enlightening or representative of real life. In the real world wealth is not a closed system and individuals are creating more wealth than they’re burning through asymmetric trading (unless you include the value of labor most people sell for poverty wages). The fact that they started with a model somewhat correlated to the way money flows through the economy then matched it with variables which they determined the value of based off the data they wanted it to fit doesn’t leave me with confidence that it’s based in reality in any way.

Of course labor should be included since that’s the primary trade most people make.

I assume that in the real literature on this the claims are more that it’s instructive that a rigged game produces outcomes that look like reality, rather than that a model of reality that seemed neutral turned out to be rigged.