The Presidency of the Joes, part II: Do What Now?

True, but @iron81 does have a point that big government spending through borrowing is in fact a policy. I agree with the broader point that Biden’s admin is doing too little too slowly. But its almost destined at this point, the US in on the decaying empire playbook and there’s no play in the playbook that says Old Guard Has An Epiphany That The Old Way Won’t Work.

Corrupt is the wrong word. Biden has clearly ceded way too much of his policy to big money interests. But corruption suggests operating outside the system. Ceding government power to corporations is how the system is designed.

And some of you think he will accomplish nothing. Who doesn’t want more police funding!

I mean he’s got more important things on his plate than some random athlete smoking weed. He probably never even heard of her until asked the question. Be mad at the reporter for not asking about Moscow Mitch or Manchin.

I’m probably risking the wrath of some but the Biden presidency is kind of like a night out in England. The pints start and everyone is having fun and then your dinner comes and its frozen peas and gray meat and then next thing you know you are pissing in a public park holding your half eaten chip shop box and saying FUCK WHY DID I DO THIS AGAIN.

Jessica Reznicek, an immensely strong & courageous Water Protector, was sentenced on Wednesday to 8 years in federal prison for her actions to stop #DAPL

On election night in 2016, two young women drove toward a construction site off Highway 7 in northwest Iowa’s Buena Vista County. Their car contained a half dozen empty coffee canisters, several quarts of motor oil, and a pile of rags.

As the results of the election were being tallied, Montoya and Reznicek steered their car to the side of the road outside the town of Newell, beside a vast stubbled field that had been emptied of corn. A quarter moon illuminated the pipeline worksite before them. Montoya was nervous but focused. “You see a bulldozer, you know what it does,” she later remembered. “You know it’s not going to do a damn bit of good.”

They grabbed one of the coffee cans whose tin they’d punctured with holes, stuffed it with rags, and placed it on the seat of an excavator. Then they filled the can with motor oil. They placed the other cans in the same manner in the seats of five more heavy machines parked at the worksite. Then they lit them.

Shortly after 11 p.m., a 911 caller reported seeing red and yellow flames puncturing the dark in a field off of Highway 7. By the time firefighters arrived to quell the blaze, Montoya and Reznicek were long gone. Only the charred skeletons of four excavators, a bulldozer, and a large portable crane remained on-site.

The cost of the women’s election-night sabotage was estimated at $2.5 million. Over the next six months, they taught themselves to use oxy-acetylene torches, which they used to damage four different pipeline valves in three counties across Iowa.

Often their actions went unmentioned by news outlets, although one local television station reported in March 2017 that someone had crawled under a fence and used a blow torch to melt a hole through one of the pipeline’s valves. Two months later, a radio station reported that a DAPL site in a different county had been tampered with. No suspects were named.

Despite engaging in what they dubbed a “campaign of arson” against a multi-billion-dollar infrastructure project, the women were never caught. Nor did they stop the pipeline. Oil was flowing by early May 2017. That summer, Montoya and Reznicek realized there was one more thing they could do to try to stop the project.

One day in late July, the women woke up in the Des Moines Catholic Worker House where they’d been living together since the fall. The building — one of hundreds of similar autonomous houses in the U.S., which promote a social justice interpretation of Catholicism — was a hub for the local activist community that had supported the pair’s less-clandestine efforts to fight the pipeline. Reznicek slung a backpack over her shoulder containing a hammer, a crowbar, and a statement the women had composed. Then, along with some legal advisors and friends, the pair drove to the offices of the Iowa Utilities Board, the state regulatory agency that had issued the permits allowing Energy Transfer Partners, DAPL’s developer, to run their pipeline throughout the state. When they arrived, the women stood in shin-high grass beside the building’s sign, squinting in the sunlight. Facing a crowd of about 20 people from various media agencies, as well as a Burger King across the street, Reznicek and Montoya took turns reading their statement as they elaborately described their many acts of eco-sabotage, and took full credit for carrying them out. 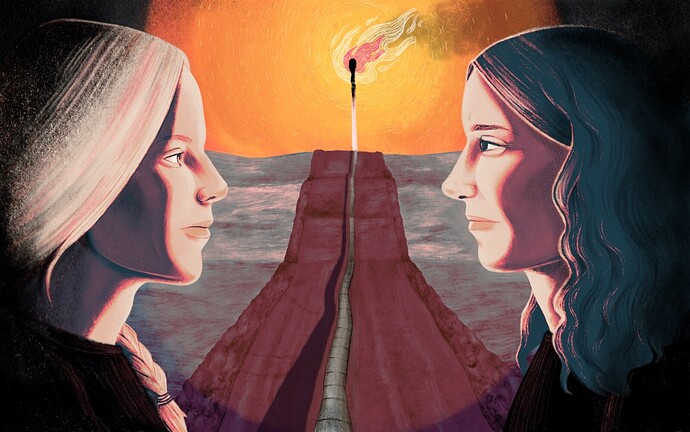 Why two women sacrificed everything to stop the Dakota Access pipeline

How an election-night fireball became a six-month pipeline sabotage spree.

I guess “activist jailed after taking credit for eco terrorism” isn’t as catchy as calling her a “Water Protector”.

There was no terrorism. They are heroes.

Only if you agree with them.

Damaging operating pipelines is incredibly reckless and someone will die. These are very high pressure systems.

This is a very stupid way to protest.

Standing around with signs is a stupid way to protest imo.

Ok. But the chances of killing an innocent bystander is pretty low.

Pretty sure it’s well established that any nun on the run gets a trip to Brazil. That should be the punishment.

Maybe they are heroic terrorists.