I bought a 47-year-old trailer that was kept in poor repair by a fucking psycho slum lord wannabe. Tons of work to do to make it better and most of it within my wheelhouse, but most of that will be in the home improvement thread at some point I suppose. Location is outstanding, with distance to the ocean measured in yards (meters) which means water rats move in during the winter. I am not sure that pest control falls under home improvement so I am starting this thread.

I am an inconsistent pacifist when it comes to animals, like most of us I guess. I have had great success getting rid of mice in the house using a live trap and relocating them.

Rats are different though. I have two live traps they have ignored and after seeing one of these monsters under the sink that looked to be several pounds and finding droppings in places that just crush any ability to deny the issue, I got a tomcat snap trap also. 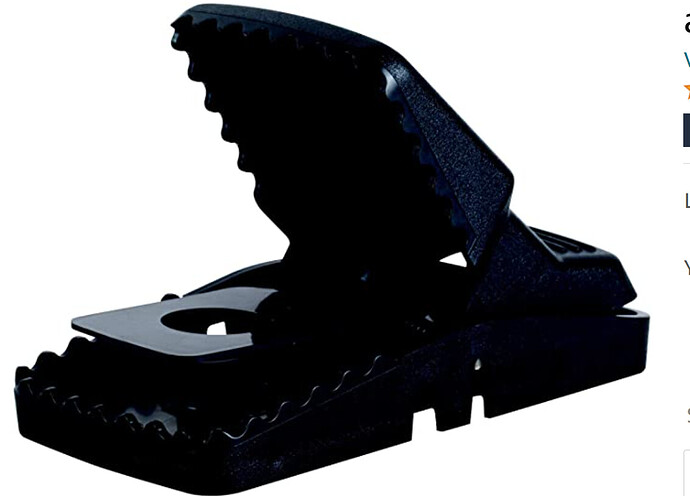 This one was triggered within a few hours, but all it had was some fur stuck in the teeth. These motherfuckers are big and strong. The previous owner half-heartedly jammed some steel wool in the holes that were never properly covered where the pipes come in under the house and they have dragged or pushed that out.

So here is where I am at. I am not okay living with rats walking around our house at night, especially since they are about the size of my damned dog. This last point, that I have a little dog that will get killed or maimed in these snap traps and kids as well preclude the use of those in most places. The live traps are not seeming to work yet, and even though we are seeing signs of them in most rooms they have not gotten into any of our food anywhere yet. I don’t want to use poison that may harm other wildlife that ingests it secondarily and also do not want to deal with huge, rotting corpses in hard to reach areas. So my plan of attack is as follows:

I have ordered some 1/4 inch hardware cloth and plan to crawl around under the house and cover any places I can see they have entry. There are a few obvious ones, all around the plumbing. We have shitty fiberglass insulation under the floor that apparently they love to nest in so I am a little squeamish about this step but I gotta tough it out. We are looking into getting natural gas installed and then maybe redoing the heating at that point, but once that decision is made and completed one way or another we can pull out the batting that is terrible anyway and go with expanding foam insulation which they do not like and will also seal everything.

I saw mixed reviews on the ultrasonic repellants and I am considering getting one of those too. I have also heard that there may be poisons that are safe for other wildlife, but i don’t know how effective they are.

Does anyone have thoughts, experience, or tips?

Surely an ultrasonic repellant wouldn’t be good with a dog in the house?

I’ve heard of a “poison” that isn’t really a toxin, it’s just something them that basically expands so much after they eat it that it blocks everything, but you already mentioned a problem with poison…they run off and die wherever and you have to find them, usually by smell a few days later.

Our best results have been with the snap traps, but we have to basically tie the bait down so it’s impossible for them to just take it and run.

One warning: find a way to protect your vehicles. Not sure if the type of rats you have are like the ones here, but if they get into the engine compartment and chew on/nest in the wiring it can be thousands of dollars to get it fixed.

Yeah, or maybe an owl box

I hate them. But I hate rats a thousand times more.

Cat urine alone can at least temporarily keep rats away.

Domesticated, declawed indoor cats aren’t going to do shit. Gotta get an outside cat from a mouser breed. Hell more than one might be necessary.

What kind of dog do you have, real or stuffed?

I’d put money on just about any dog v rat.

Not for the faint hearts. The cat is also very young and not really skilled, but had some hunting inclinations from the youngest age. They train the cat basically specifically for the purpose of protection from rats.

The film is very cut. The whole process took in the reality more than an hour. The cat was also pretty done afterwards.

I know people around here swear by owl boxes, but I live in a mostly rural-ish area. If it’s feasible @JohnnyTruant you might look into it. Big barn or horned owls will have no issues going after the rats, but you’d have to keep any small dog in at night.

What do your kids say?

And rat cages are the way to go, with a little piece of mars bar inside. Then set that fucker on fire.

Yeah, i forgot to mention. We bait our traps with pieces of dog food covered in peanut butter. They can’t resist.

I’m 100% for natural decritterization. A couple of owls and some snakes should do the trick.

Yeah, my parents have a goddamn enormous rat snake living under the front porch. But you’d have to make sure the dog doesn’t mess with it.

Baltimore has approximately 10000000000 rats per square yard I think. We’ve got 3 cats and never had one in the house, although we had one or two mice at our old place.

I’m not usually a big natural remedy kind of guy, but try using peppermint oil as a repellent. A few years ago at a place we were renting we went out and sprinkled some around the fences in the yard and a minute or two later several little rat bros scurried out from under our shed and hightailed it out of there.

Place I used to work there were a lot of old buildings that weren’t occupied most of the time. Rodent droppings were everywhere and the smell was pretty fucking potent. We worried about Hantavirus then. One of our guys found a rattlesnake living in the ceiling. Don’t know how he got there but I’m sure he was fat and happy.

I don’t know what it is about electrical insulation but it’s true they like to chew on it. Steel wool works but you really have to stuff it in the gaps. Rats are smart fuckers.

When I was a kid we had a cat which would bring home muskrats for us to eat.

I recently used a large glue trap to catch an enormous rat I saw running around our courtyard with our chihuahua’s tennis ball. I found the trap about 100 feet away with 2 rat feet, a tail, and a half-dollar sized piece of ribcage attached. Really brutal scene. I’m thinking a roadrunner or cat snatched him up after hearing the struggle. 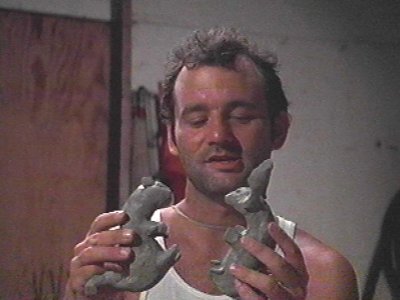