Good guys with guns and FUNDS: The police?

I remember a big media attention incident a few years ago that I think was discussed in old politics. An unarmed man in huntington beach CA was shot and killed by a police officer who emptied a clip into the guy after claiming the man reached for the officer’s belt.

Here was the original story: 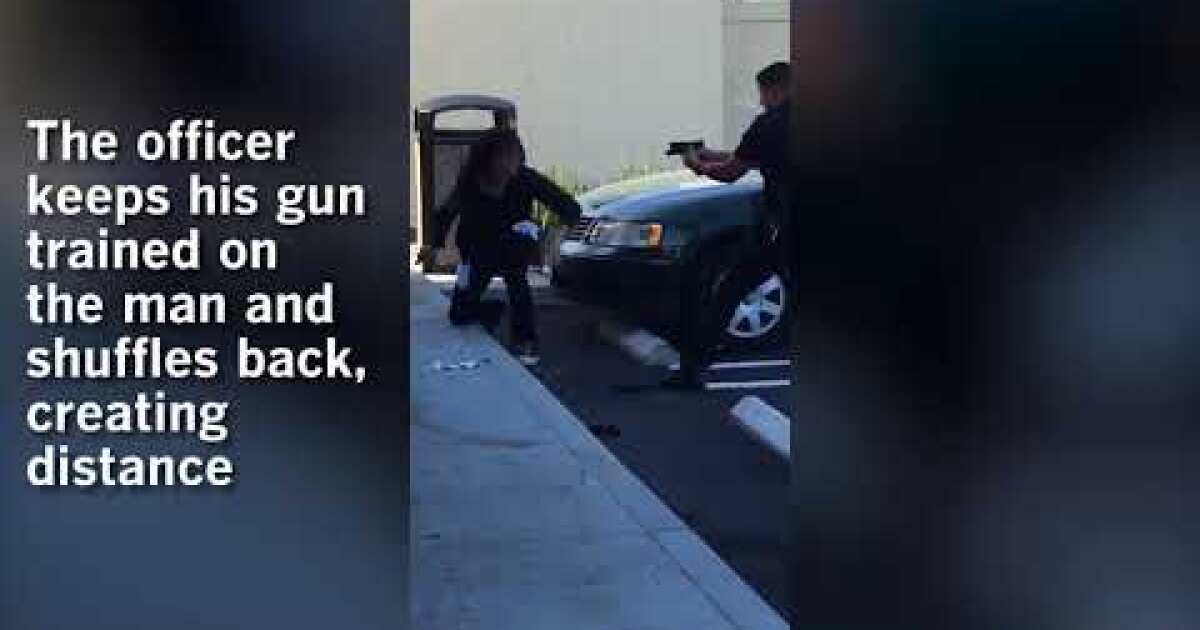 A Huntington Beach police officer was captured on video Friday morning as he struggled with a suspect in a convenience store parking lot and then shot the man multiple times, fatally wounding him.

I remember there was a LOT of outcry, and the original footage looked suspicious as hell, as did the story.

This Community Briefing video is about an officer involved shooting involving one of our officers at a local convenience store in September 2017. There are several reasons why we decided to do a video now. The shooting drew a great deal of community interest, especially due to the edited video that went viral on social media before the scene was even secure. Although much of that attention waned in the weeks following the shooting, there have been some who have asked questions about it to this day. There was a change in state law that took effect earlier this year requiring the release of records (when requested) in officer involved shooting cases.

It has taken us some time to prepare the files in this case and other officer involved shooting cases in compliance with the law. The files and videos we had in this case were recently released to several media outlets, nonprofits, and individuals.

The same law change permits us to release more information than we have ever been allowed to release in the past, so we decided to put together a video summary of the case along with body worn camera footage from the officer for our community to view. As mentioned in the video, please contact me through our website if you have any questions or would like additional information. Please be advised, the video is graphic and may be disturbing to some.

What ensues is the encounter from several angles, which clearly show the officer giving appropriate warnings, tasing the man to no effect, and getting into an intense physical fight with a man that was clearly very strong and very dangerous. In the scuffle you can clearly see the man grab something from the officer’s belt, at which point the gun is drawn and he is shot.

They released the body cam footage as well, and it does appear the shooting was justified. All witnesses stated they were extremely concerned for the officer’s safety and you can hear in one video someone screaming “HELP HIM!”

Anyway, I just wanted to use this story as an example. I think there is too little police oversight and cops do a lot of fucked up shit, and get away with it. The murder of homeless man Kelly Thomas in Fullerton CA really bothered me. Both those cops got away with it with zero consequence. In california, BY LAW, police records are private. Who polices the police?

With police killing innocent people for non-crimes all the time, I also want to note that there are 100’s of thousands of police interactions a day where an officer behaves lawfully and competently. The few that don’t, however, need to be dealt with appropriately. I think the HBPD’s response to the incident was very, very good transparent policing. Although, I wonder if the officer was at fault if that video ever would have seen the light of day. Kind of doubt it.

My take is that policework by nature attracts a certain type of individual. This individual leans towards violence and is a bit of a bully. The nature of the work dulls one’s emotions and you lose a natural empathy. You have to, or the work becomes impossible. I think the United States is overpoliced and that police unions are far too powerful, particularly in California. I believe the problem is systemic and proper oversight would fix a lot of problems. That all said, I believe the majority of police are law abiding and doing their jobs as they are trained to do.

I agree with the above. I also think it’s important to note that there are approximately 18,000 different police agencies (real not /s) in the United States. Some of them are everything a police department could hope to be and fantastic, some of them are on the complete other side of the spectrum and are basically organized criminals, and absolutely every point in between. It’s probably a pretty normal looking distribution around some ‘sort of ok’ mark.

Just to be clear I’m not saying that the system itself isn’t designed to do some ugly stuff and that the police don’t contribute to it. (racial profiling in particular is pretty pernicious and I have a lot of thoughts about how and why it happens) I’m just saying that the average police department thinks that they are doing the right thing most days.

What is the point of this thread?

I mean I think everybody gets that. But still TOO MANY in my opinion. And the system itself is completely broken with the militarizing of the forces and the strange fetish so many citizens have with cops and uniformed personnel in general.

But the bottom line for me is, yeah not all cops. But they need to stop protecting the fucking assholes who do break the law, because that makes them bad guys too.

Think about how much shit use to happen before everyone had cameras.

Yeah it’s pretty terrifying. It also is yet another excellent reason why black people being angry is 1000% understandable and not grounds to get angry back.

Not on this forum but out in the world there are an awful lot of white people who seem to think that black people are angry about some minor inconvenience and should just get over it lol. They’ll be mad for at least another generation or two after the oppression fully stops. The clock hasn’t even started yet for them to get over it.

Was just reading about this one. Cop looks pretty ineffectual but showed good restraint not shooting the guy (who was very obviously unarmed, and nobody knew he had done anything violent at the time) or getting into any kind of hand-to-hand confrontation and risk losing his rifle.

If it was a black kid wanted for triple homicide chasing a dipshit cop we would reading the obituary.

I believe the majority of police are law abiding and doing their jobs as they are trained to do.

This is precisely the problem. Brutality is their training. Hot take maybe, - - yes all cops. OK this one incident escalated before it got to shooting. Why was the guy stopped in the first place? Was he actively committing a crime? Story said he ‘refused to follow the officer’s commands’. Have you ever thought you lived in a place where there was somebody whose commands you must follow or get beaten or killed? And they’re supposed to be the good guys in this scenario?

Policing is selective, the vast majority aren’t out there investigating bank fraud, they’re policing the daily lives of the poor and communities of color. That has always been their job.

That you and I don’t see that immediately is a testament not just to our whiteness and comparative wealth but the incredible effectiveness of generations of pro police propaganda.
From Jimmy Stewart as the noble FBI agent (an agency whose original function was and in part still is the sabotage of the political left), to Joe Friday to a million Law & Order episodes, we having no direct experience with law enforcement don’t realize how much that’s not how it works AT ALL.

The constant haranguing and predation upon American society’s out-groups (almost always communities of color) has always been police depatments’ function in our society. It is impossible to take part in it and remain clean. So yeah, all cops. ICE isn’t an abberation, is SOP.

Last weekend I went to NYC to visit my daughter and her long-time boyfriend. We ended our day on Saturday at the Bronx Night Market, which is a weekly pop-up food court. I would estimate that 90% of the visitors and vendors were POC. As I moved up to the counter of a food stall I was slightly jostled from the side. I looked over and a 20-something white cop slightly jumped back and said “Sorry, Sir.”

I assume I muttered something like “OK,” or “No Problem”

As I turned away, he blurted out “Again, sorry.”

And my first thought was ‘how likely is it that a black person would get a double-sorry’?

I guess I am getting pretty jaded.

Probably one of the rare good ones that are aware of how bad black/pd relations are in major cities like NY.

@DrRJKavanagh
Orlando police arrested a six-year-old Black girl for "throwing a tantrum" in her first-grade class. The cops handcuffed her, put her in the back of a police car and took her to a juvenile detention facility where they fingerprinted her and took a mugshot. wfla.com/news/florida/f…
next page →