Bread Thread aka How to Make the Perfect Sourdough Bread

Here is where we discuss the finer points of baking that are too advanced for the proletariat cooks here, and test how good our SEO is. If social revolution won’t bring the masses here, maybe the sourdough bread revolution can. Post your sourdough recipes, sourdough starter questions, and anything else related to baking sourdough bread. We’ll even boths sides this and accept regular breads. 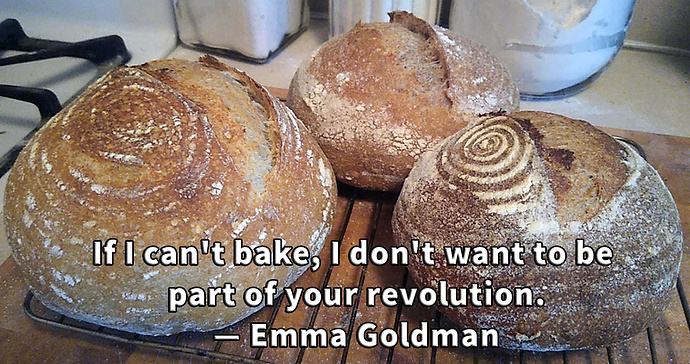 No shame in posting bad food. Everyone’s got to start somewhere. I’ve never done sourdough, but SE had a recent article that you might find helpful: 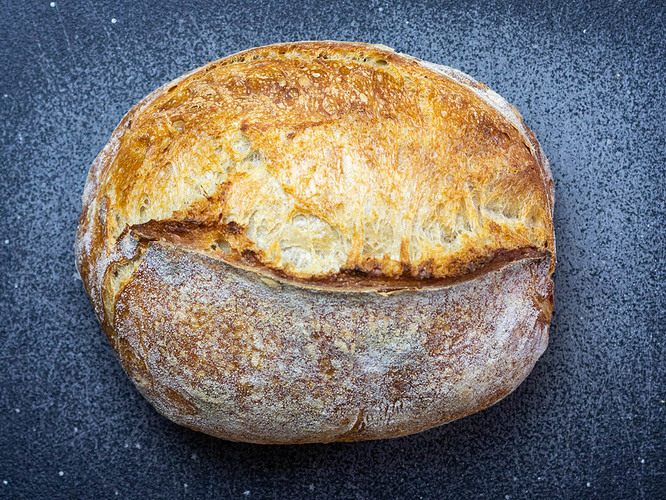 How to Make a Sourdough Bread Loaf Recipe

omg, you rascal, you!

How old is your starter? After feeding it, how big does it get? If it’s in a jar it should be like 3x as big 8-10 hours after you feed it. If it’s not there yet but is sour, feed it 2x a day for a few days. Keep it warm. 85 is probably optimal and warmer is better than cooler.

So, I’m sure I committed many sins here, but my starter’s mostly been in the fridge since I got it and I’ve been feeding it once a week, per the instructions I got with it (which say, once a week in the fridge, or more often if you take it out to bake with). I think it’s like 10 years old?

So, yesterday I made the levain with some of the discard from my weekly feeding out of the fridge. I had talked about that with my coworker and he was like “well, you can try it, but you’ll probably get a lot better results with intermediate feedings before baking”. I think next weekend I’ll try the schedule outlined in this article, which has you keep the starter in the fridge Sun-Thurs before feeding it Thu/Fri nights ahead of making the levain. I’m not trying to feed my starter every day here, I only have so much flour.

I got into it after letting it cool a couple hours. The end that didn’t rise: 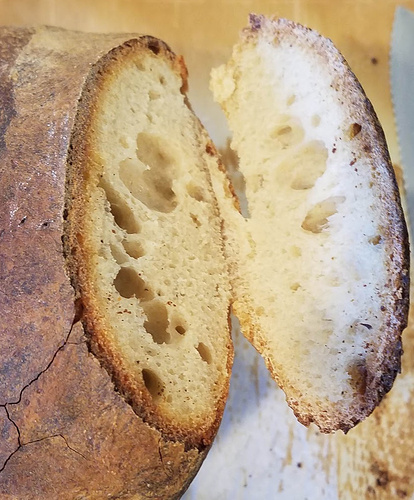 The end that kinda did: 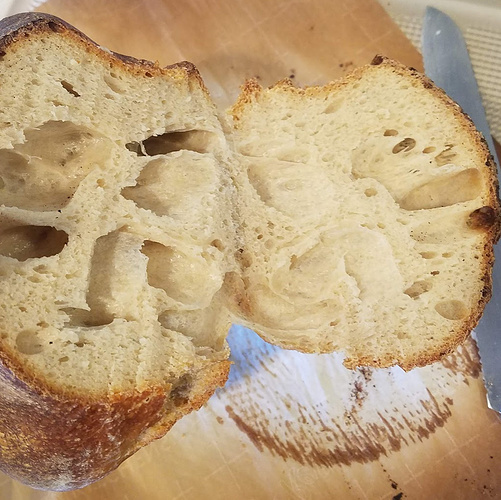 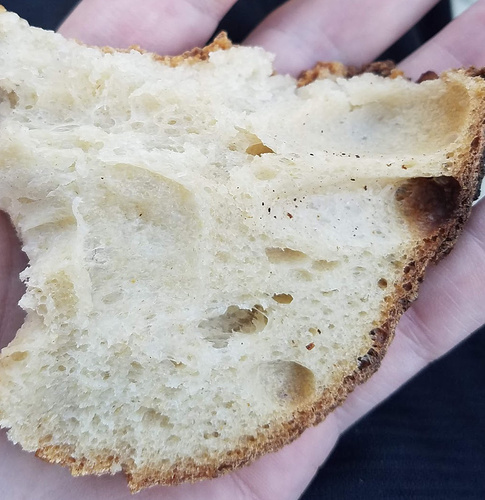 Good: I kinda liked the flavor of the crust, though it helps that I kinda like the taste of burned-ish bread crust to begin with. Like I said, I don’t have a dutch oven - I googled alternatives and came across something saying you can recreate the steamy sort of environment by putting a pan with water underneath it in the oven, then taking it out when instructions say to take the lid off. The recipe I followed said 20 mins w/ lid, 30 mins w/o - I think maybe I’d do an extra 10 mins with the water given that the crust got a little burned here, but not a total disaster. Also I’m getting an oven thermometer delivered since I don’t know if I can totally trust my oven, often my gf bakes things that come out undercooked after the specified amount of time.

Bad: well, look at it. Some of the inside seems a little dense, maybe sliiiightly undercooked.

Flavor reminds me of bran flakes. Doesn’t taste very sour. Hopefully having a more active starter by taking it out of the fridge and giving it a couple feedings before the next bake will improve this a bit.

You got a starter 10 years ago and have fed it once per week and this is the first time you’ve actually used it to bake?

Haha no, I got starter from someone who said their starter was 10 years old.

What was your recipe and process? I take my starter out of the fridge for a couple of hours then build the levain an hour or two later and it’s ready to use in about 4 hours. I feed it WW and rye which makes it really active.

Went back and read more and yeah, perfect loaf is a good resource.

Some of the inside seems a little dense, maybe sliiiightly undercooked.

Dense is probably under fermented. Leave it an hour longer next time before shaping. Did you put it in the fridge overnight? That allows the flavor to develop

I’m going to be shaping an 82% hydration dough in half an hour and that should be fun.

I used their beginner’s recipe (72% hydration) except I don’t have the exact ingredients - I used 83% King Arthur bread flour, 17% Trader Joe’s whole wheat (so, 17% WW instead of like 11% WW/6% rye). I’ve been feeding the starter all purpose flour, not sure if that’s bad. I followed the same timing recommendations - 5 hour levain, 4 hour bulk fermentation, 16 hours in the fridge overnight before baking. My pictures of course look nothing like the article - compare my flat-ass dough (pre-bake) above to the photos in their article where their dough’s already all fluffy and shit before they score it.

How often do you feed your starter?

I feed it whenever I bake so once or twice a week. I made mine from scratch a couple of months ago so I was feeding it for a day or two in advance before baking because it was never active enough, but now it doesn’t need it. I was using perfectlaughs (nice autocorrect) schedule but have been extending the 4 Hour bulk fermentation by an hour or two until I start seeing some bubbles.

Thanks, I’ll try a longer fermentation too

Look and taste sounds like it’s underproved.
Time proofing the levain may be too short if it’s only 4 or 5 hours. Do a float test before mixing levain into dough.

Proofing times are only guidelines, you need to get a feel for what it should look/feel like at every step. Levain should float. After fermentation dough should be kinda bouncy, jiggly. Shaped dough needs to have good surface tension and hold its shape for a while, still be jiggly.

72% is on the wet side for a beginner and with all purpose flour imo. it’ll be easier to maintain tension with less. Also getting some bread flour will make it easier. Also less while wheat.

Also getting some bread flour will make it easier.

Good luck with that. I check any time I’m in a store that sells flour and I haven’t seen it since early March.

Costco has some. Orlando so ymmv but still. 50lb bags tho. What I can’t find anywhere is whole wheat.

72% is on the wet side for a beginner and with all purpose flour imo. it’ll be easier to maintain tension with less. Also getting some bread flour will make it easier. Also less while wheat.

To clarify, I’ve been feeding the starter all purpose but I have bread flour for the actual dough.

Good luck with that.

And yeah, same problem here, after requesting bread flour in several Instacart orders we only just got some for the first time last week, lol.

We got a 50 pound bag at Sams Club in February and that’s the last time I’ve seen it anywhere near me. That bag is long gone, and we’ve just been buying all purpose the past couple of months.

Her IG and YouTube is great. Here she shows difference between shorter and longer bulk ferment. This useless software won’t embed the IG carousel so you need to click through to see comparison pics 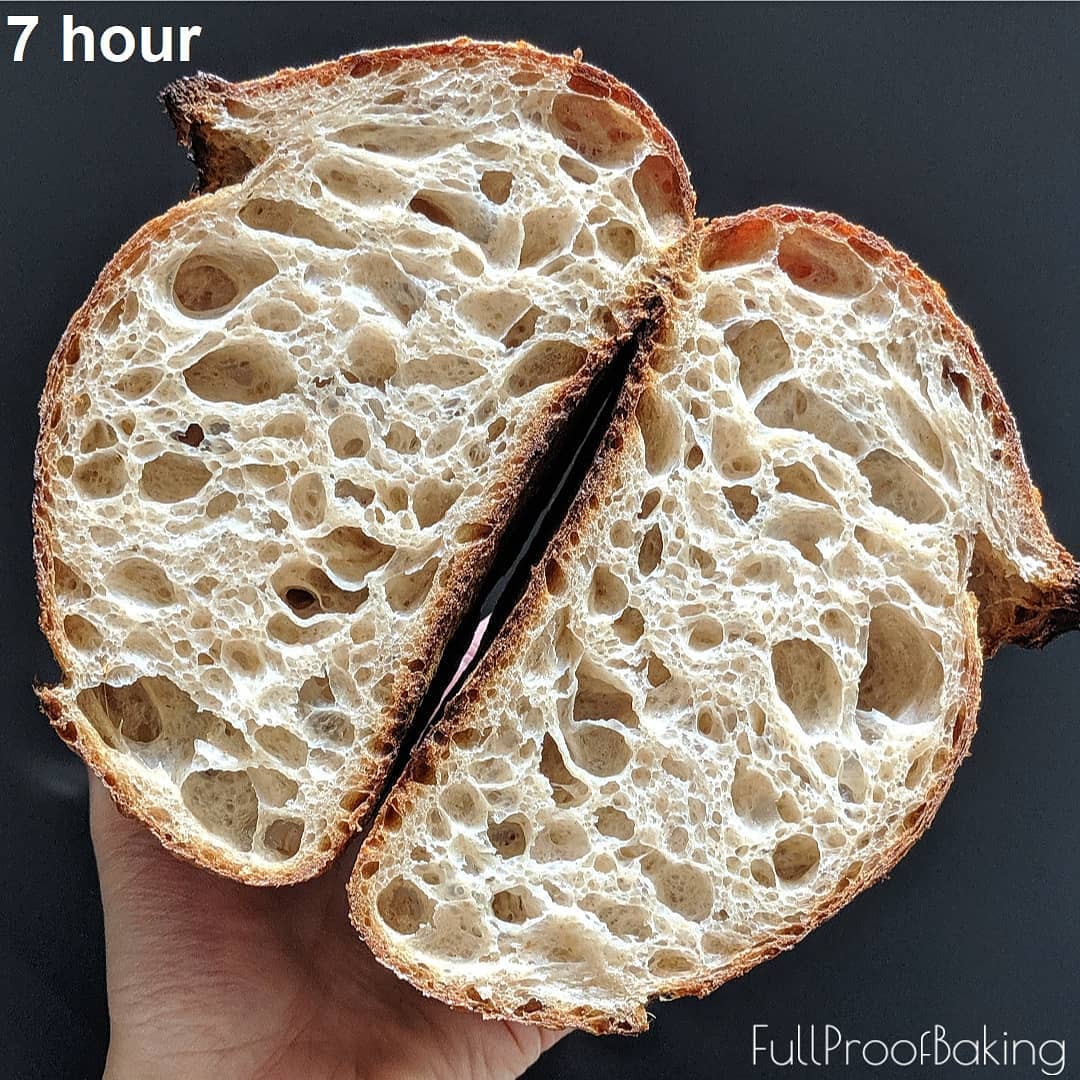 What can it look like when you under- or over-shoot the fermentation? Let's take... 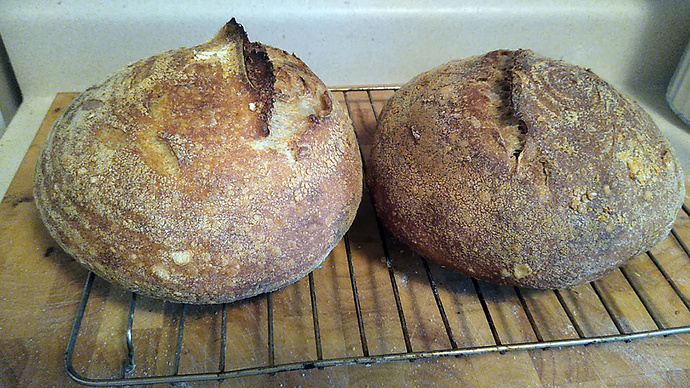 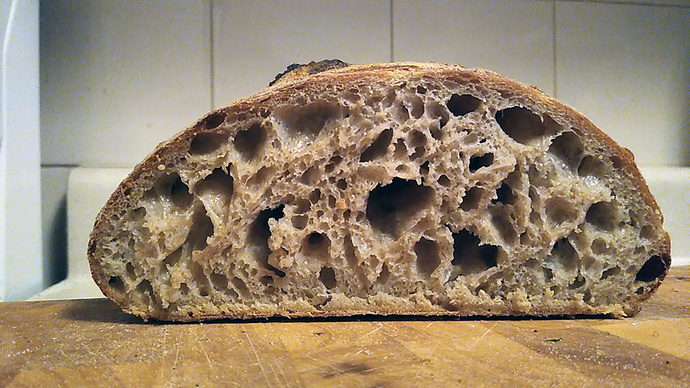 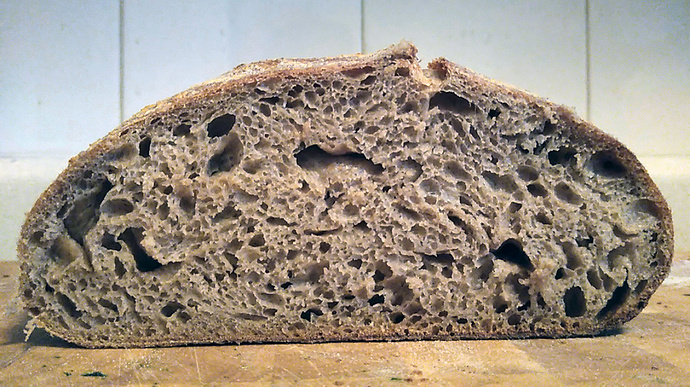 WW crumb looks better but I was going for a more open crumb so don’t mind the other one, just need to get the same amount of air but dispersed more uniformly.

Thanks for the IG link! It’s funny that all of those look way better than mine lol

IDK, maybe b/c it’s 20% levain fed 50:50 ww/rye. Going to make one loaf with an AP levain next time and see what the difference is.

Gonna try to get my sourdough starter going for some weekend backing following the schedule here. Just took it out of the fridge, where it had been since Saturday: 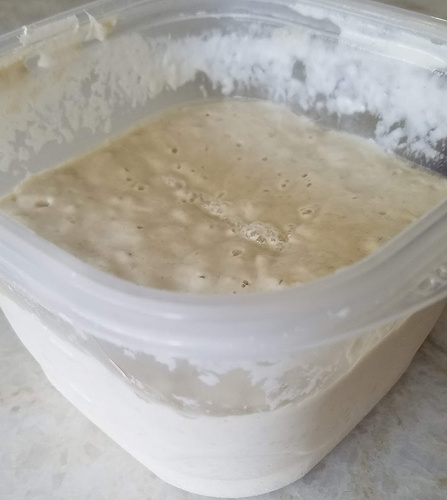 This thing wants me to feed it tonight and twice a day Fri/Sat, seems like a lot, dunno how much flour they think I have in this house

Seems excessive but part of the fun is trying out different things. Do you have discard recipes? I make banana muffins, pancakes and pizza dough with mine.

Totally agree. For me the experiment is 90% of the fun. Half the time I don’t even care about eating what I make.